Kitty Destruction, Ninja Cat's Side of the Story

It wasn't me, the great Ninja who was naughty, it was that kitten, Spyder. When Miss E, leaves the house, she always leaves me in charge. Queen Bambi usually goes off to her boudoir to rest, or whatever it is that queen cats do.

So that leaves me and Spyder. He is always wanting to play. But, he needs to learn the way of the ninja, learn to control his powers, and learn to walk across walls in the dark. So, you see, I am a very well disciplined cat. I am trying my best to teach him, but he would rather run and play.

So to comply with his need for rough house, I indulged him. It turned into a disaster. While playing chase, I guess I am a little too fast for the poor boy, because when I ran into the table, he intended to leap over it, and instead, he knocked it over. I gave him a little fake nip on his tail and he squeaked so much that Lady Bambi came after me with a vengeance. She cats can get very much like mother tigers when it comes to the youngsters.

Needless to say I would never hurt her majesty. So, to let her feel secure in her position as queen of the household, I pretended to be frightened of her. She almost had me cornered when my claws accidentally pulled the carpet out from under the sofa, and neither of us could put it back where it belonged. I had intended to use that opportunity to demonstrate to Spyder the whirling claw technique, but he was hiding in the kitchen, he never saw it. Oh, the frustrations of a Sensei. He must learn to focus! I retired to my room and under the bed to meditate

A short while later, I heard Spyder and Bambi playing, when I heard a sudden crash, then, a splash! I was out there in a flash! If they needed protecting there I was with my saber sharp teeth bared.

Imagine my shock to learn that little Spyder managed to tear the top off the aquarium and toss the lights into the water. It really 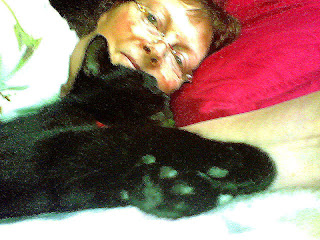 made quite a scene. Lucky those were safety lights. Obviously, Spyder has some hidden talents that could be honed.

I've really been remiss in teaching him to quietly attack and leave no evidence and to behave in an honorable manner. When Miss E came home she thought some hooligans had been in the house.

I've spent all evening consoling her at her bedside.

So as you can see, in our household one is naughty, one is nice and one is NINJA!
Posted by Elizabeth Munroz at 5:54 AM

You tossed lights into water? You're lucky they were safety lights. Whew!

We think they weren't quite all that safe, as there was a bit of a buzz when Miss E unplugged them. Haven't turned them on since then. Poor fishies!