A Cat with Eyebrows

In response to a Cat named Freya's blog, where she posted the delightful video of Maru the cat who loves boxes, I present here  Maru cat, affectionately called Maru-chan who has what appears to be eyebrows. Having a white cat with markings close to these, I trust the Maru Chans eyebrows are authentic. The question had arised in the interview and it was shown the eyebrows were not painted on but a natural coloration of the fur. The picture on the right is of my Spyder and I can see how his markings could genetically produce a cat with eyebrowsl 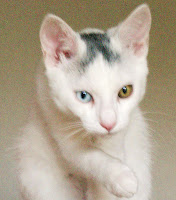 Regarding the Interview with cat's man:

Translated by my Japanese friend, and loosely remembered by me.

The man says he has never wanted any cats, but when his daughter brought it home and he saw it, he loved it on first sight. He's never going to get rid of the cat. Jokingly, he said he'll get rid of his wife first.

But, I think if you ask the wife, she may have the same answer.

This is the link to the video.

Posted by Elizabeth Munroz at 4:41 AM