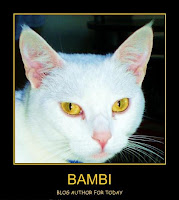 Never a dull moment with our little Spyder Cat! I don't know how he is going to make it to adulthood without us to watch over him. It is frightening how quickly he can endanger himself!

Ninja and I were lying on the bed, me at the foot and Ninja at Miss E's hip. He's been hiding out in the other room a lot lately, so I let him have my space next to Miss E. Though he says he just wants to meditate, I think he gets lonesome.

Spyder was on top of the set of drawers, which is pretty high up and a favorite resting place of mine, too. Ninja is too heavy to leap up there, so he hasn't had the opportunity to have such a great view of the room.

Recently, Miss E put a new collar on our boy. He has never been able to adjust to one. He always managed to hook his jaw underneath whatever collar he was wearing and get it caught, always a frightening prospect! Even though they were supposed to be safety collars, they didn't break away as they were supposed to. (Perhaps the full weight of the cat needs to be pulling on it?) Each time this has happened Miss E caught him just in time. 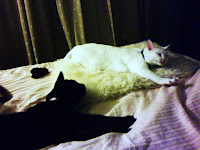 Ninja and I both wear collars with ID tags and little bells. Though, I suppose the bells are not really necessary, I like them. Miss E can always tell where we are located, especially if we happen to get outside. She is very scared that if we get outside we might not be found before the muscle dog next door would get to us. It was shortly after he smashed into Keli last March when she died, so it is understandable why she is concerned. Though, I don't think Ninja or I would travel far if we got out, perhaps it is not all that safe. We are sorely tempted every day with all the tantalizing smells and noises outside, especially the birds and bugs! Miss E says when springtime arrives she will teach us how to go outside with her on a halter and leash.

This time, the collar that Miss E bought for Spyder was very stretchy, and it simply fit together by Velcro. So, our young boy adjusted quite well. Miss E always watches him carefully when she introduces a new collar, and we all relaxed. He had been wearing it all week just fine. Even though he scratched at it just a little bit, he said it wasn't uncomfortable, so he didn't try to bite at it. We were all happy that he finally had a collar, and soon he could have an ID tag, too. 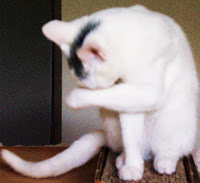 So yesterday, Miss E attached a little bell with a little gold circlet to hold it onto the collar. The ID tag hasn't arrived yet. Spyder adjusted to the bell quite well, too. Or so we thought. Thank heavens this didn't happen while we were all asleep. Though I suspect Miss E would have woken up in time to help him, I'm sure it was much better the way it occurred.

Miss E was reading and listening to her music. We like to listen too. Little Mister Spyder was washing himself. "Lickedy Spit" is what he calls it. Silly boy!

Well, old habits die hard is what they say, and they are correct! Suddenly we heard the strangest noise coming from the top of the dresser! I looked up and there was Spyder writhing around. Miss E looked up and began to make danger alert noises. She also puts a soothing calm noise in between. So, even though I was rattled, I didn't try to jump up where Spyder was located in order to investigate. Ninja told me to "Chill". And as he knew Miss E would run to the rescue, he didn't use his Ninja skills to fly about the room. He says the only times he should do that is when it is completely dark anyways.

By the time Miss E got to Spyder, he was up on his hind legs and twisting into an odd shape. I thought he was going to fall right off. Miss E reached up and held him in place just as he turned.

Then I saw it. Not only had he pulled the collar up over his jaw, he had gotten the little round ring that holds the bell caught over his big bottom tooth and chin. Fortunately the collar had already disconnected and was hanging loose. But, there seemed no hope for the ring and the bell caught over his teeth and jaw. Oh, it was terrible to see. My heart was racing! Ninja said my eyes were big as saucers. I didn't tell him that his were also very wide. I couldn't even see the gold of his eyes, they were so wide! 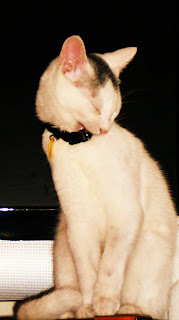 Spyder was bravely trying to deal with the problem, trying to claw at it, but I could tell he was terrified and frantic. I think Miss E was a little terrified too.

Miss E tried to lift the ring off Spyder's jaw, but it was firmly stuck. I wished she could call the Rescue Squad. He seemed to be gagging a bit. Though, later, Ninja explained to me that as uncomfortable Spyder might have been, he certainly could breathe. I think Miss E was trying to figure out how she could get him to an emergency vet when she finally got Spyder pulled off the top of the dresser and he flipped upside down into her arms.

What an amazing miracle! Somehow that ring suddenly was no longer caught over his jaw and tooth! I stood up and looked down on the floor and there was the collar with the bell still attached. Poor Spyder was quite traumatized. Miss E held him close to her like a little human baby and cooed at him until he calmed down. We were all so relieved and grateful!

It was then that she got Spyder's mouth open to take a look at the damage. Another miracle! No cuts or bleeding. Spyder is a very lucky kitten. We are all very lucky that he is okay. In fact, he is doing so well that we've all been playing chase, and Spyder got Miss E to play Throw the Mousie with him! You know how he loves to get the mousie and bring it back to her so she can throw it again! He never tires of that game. Though, I sometimes wonder if Miss E's arm gets tired.

After all this, Ninja went back to his snuggle bed in the other room. It's the one that used to be mine, but I let him use it ever since I got my little boudoir, which is so much more comfy. Then, Spyder did something he has never done before. I was taking a little nap, and he was lying near me. He was washing himself, and then suddenly he came over and started kissing and washing my forehead.

What a sweet little boy he is!

See A discussion on Catster about cats getting their jaws caught on their collars
Posted by Elizabeth Munroz at 5:42 AM

Oh my gosh! What a terrible thing to happen. Thank goodness he is OK. It might be best to avoid collars ~ I never let Milo and Alfie wear one (or previous cats) ~ I have them microchipped instead. I have heard far too many woeful tales of cats getting stuck, or hooked up on collars ~ even safety collars.
Micro chipping isn't cheap but you may be able to negotiate a deal by having all the cats done at once at a cat charity type place ~ especially if you explain what happened.

All of us are microchipped. It's just that if we get out, we are aware there are neighbors who will not make efforts to find our home to have our chips read. Miss E has never believed in using collars until living here. Some bad things have happened to other kitties here. It's scarey to think of it. We will just have to be extremely careful that none of us get outside.