We were left all to ourselves today.
Miss E got up early, so we knew something different would occur. She was gone many hours and did not return until late evening. 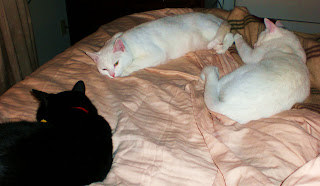 We were bored and slept a lot, except for when Spyder wanted to play. We took turns keeping him occupied, and did not send him out to the garage, even once.

I do believe that Ninja has lightened up on his ninja training. Perhaps it has something to do with the Monk's visit yesterday that has influenced him.

As the hours went by and the sun went down, we were quite lonesome, even though we had each other.

Spyder began to become very concerned. He was afraid Miss E wouldn't come home at all. She had been gone so long. The longest ever we can remember. 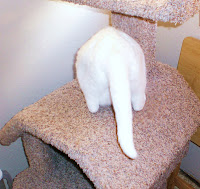 I taught him an old magic that mother taught to me, and her mother before her, all the way back to Bastet, the Queen of all cats. Well, there are others, too. But, Bastet is the only one that comes to mind at the moment. As Queen, I should really study this more.

I'm sure many purrsons have observed this magic we cats perform. Some do not understand it, or even like it. But, in our home, it would be more than acceptable. I can smell very old real mouse smell from outside Miss E's doorstep left there in times past by other cats who have brought this same magic to her as a gift. She must have liked it, otherwise there would not have been so many outside mouses left for her.

So, I explained to Spyder that if he leaves a mousie at the door for Miss E, it is the most wonderful loving gift he can give her and she will have good luck from accepting his gift. Plus, it will insure that we all remain here happily. 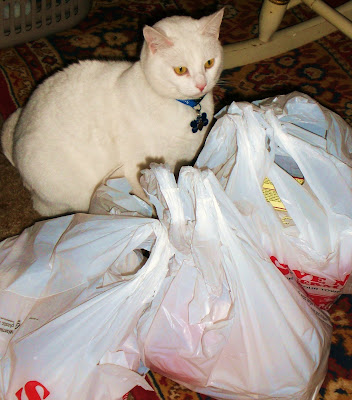 It took him a long time to decide which mousies to use and he looked all over the house for just the right one. Miss E provides us with many types and colors and styles of mousies.

I can understand why he had a hard decision to make. And, Spyder has a tendency to toss them all about in the midst of his decision making.

She called us in her meowy voice the instant she arrived and we all came running to see what she brought us. We had a wonderful time perusing her purse and shoes and hands. She was with her son, we could tell. So, she must have gone to the big city where the fog lives, Fran Fran Sisco, I believe it is called.

She brought in those lovely plastic bags full of surprises she so often presents to us when she arrives. 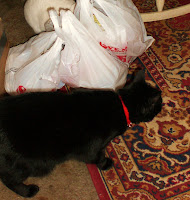 When I investigate the bags thoroughly, Miss E calls me the Bag Lady. I certainly am a Lady, no doubt. How could a queen be otherwise? And bags are always filled with such wonderful ingredients. One can hardly resist. There were so many delicious fragrances emanating from them, I was quite enthused. Maybe she had been away a long time, but it was well worth the wait.

When Miss E settled down and we sniffed her clothes, we knew that she visited six other cats from two households. One very shy cat we could barely smell. The other who didn't let her touch, though we could taste where he had bitten her shoe, and four others who's fur fragrance were very evident. Spyder wondered if this meant she was going to bring them to live with us. But, I do not think so.

Ninja mumbled. He didn't want any more new cats to come live with us. But, by the way Miss E greeted us, I don't think she has any more love in her heart to spread around at the moment for other cats. We are plenty cats for her right now.


And because Spyder practiced cat magic,

and left all the mousies in the doorway,

he insured that would be so.

Posted by Elizabeth Munroz at 11:41 PM

Oh I could just do with a day shopping in Fran Fran Sisco! :sigh:

That would be loads of fun!!!