Oh, my! What a day this has been! Or shall I say, Evening? We certainly had a bit of a fright. Ninja and I were on the bed in the spare room. The bed is all nice and toasty in there. Miss E keeps the electric blanket on for us when it is cold, and it most definitely has been frigid. Temperatures have been freezing. I am so grateful that I am not an outdoor cat, as I was in my early kittenhood. It was a world of terrible danger for kittens, as my mother, Queen Island Fur, told us.  Feral cats name themselves and that is why my mother had that unusual name. I do not know what her human name became because we were separated when we were all brought to the shelter, except for my brother, Sir Patch Face who remained well hidden. I do hope he is not out there in the cold this evening.

Oh, yes, back to the goings on at our home tonight. As I mentioned before, Ninja and I were resting upon the spare bed, when we saw a bright flash of light out in the hallway, and at that very moment the ceiling light fixture vibrated quite loudly. And, then, POP! Instantly we sat up. I was stunned to say the  least. Ninja was as wide eyed as I was. Then, as we looked out into the hall we saw sparks falling to the carpet. Ninja said, "Don't worry, My Lady. I'll save you." He jumped off the bed and ran past the hall and out through our little swinging door to the garage. I'm not sure how he expected to save me by leaving me alone like that. Being a ninja, he must have had a plan. I have learned that he has unfathomable behaviors because of his ninja training.

As the sparks were falling onto the carpet, Miss E ran in from the kitchen with Spyder right behind her. The little fellow was terrified and ran right past her and through the little door into the garage. Miss E quickly stomped on the sparks, saving the carpet and ourselves. What a heroine she is. I'm proud of her.

In the meantime, with Spyder running out to the garage, I believe it must have foiled Ninja's plan for protecting me from harm as he hurried back into the house and up onto the bed and sat beside me with Spyder following right behind. Much to my surprise, Miss E quickly closed the door on us. In a way, we were most grateful that we were not required to witness any more. Though, we could hear her open her closet and grab clothing off the hangers. She then, made a telephone call. I think she was discussing the incident with someone. But, she didn't stay on the telephone for long.

She came rushing into our room groping around in the dark, and picked up Spyder and his carrier, then left the room. Soon, she was back to carry me, and my carrier into the other room. Well, I am well educated enough, that I understood what would occur next and I was not about to be treated so unceremoniously. I immediately protested and held myself firm, as any queen wanting to preserve her dignity would do! But, Miss E was quite persuasive in her pursuit of me and her desire to protect me, as she then let me know. So, I then went willingly into my carrier as she gave me the necessary push to lock the gate behind me. She then ran out of the room and had quite a time extracting Ninja from under the bed where he was practicing his ninja invisibility. But, she was quite determined. She must have honed senses because before I knew it Ninja was calling loudly to her, some not very nice names. Thank heavens I do not know the secret language of the ninja cats, or I might have been embarrassed and offended.

Miss E took us all outside placing us beside the front door in the rain, and hurried back into the house to bring her purse and laptop. Apparently the operator on the telephone call had told her to vacate our home. She went to her automobile and backed it out away from the house and was just beginning to move us into it when a very large and noisy vehicle appeared on the scene. Some men arrived dressed in very odd attire. So, Miss E was not able to put us in the back seat of the car where we would have been more comfortable. Instead we were a bit bombarded by rain jumping through the breathing holes on the sides of our carriers, and worst of all through our front gates. Ninja was now chanting loudly. He does this occasionally. He has told me it is a centering exercise, but I find it quite disturbing and quite unsettling. I just tucked myself into the back of my carrier being careful to not permit the raindrops to muss my beautiful white fur. I could see little Spyder catty corner below and across from me, as my carrier was atop Ninja's, as it should be, of course. Miss E is very respectful of my position that way, and follows proper protocol. It was interesting to observe little Mr. Spyder's reaction to all this. He does not care if he gets wet and he had his nose stuck right through the spaces of his gate. He was very curiously watching everything that was going on. Though, I could tell he was a bit nervous. We were all glad to be safe, even if it was cold and raining. 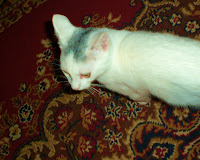 Soon the men left the premises and Miss E returned us to our home environment. There was a terrible odor which still emanated from the hallway, not so much from the carpet as the sparks has not had the opportunity to do much but little damage, which we all later inspected. The odor was from the curly light that had been hanging from the fixture and explodes. Miss E called it mercury vapor, and opened the windows and doors to let the odor leave. Of course she kept the screens closed so that we would not run out. But, foolish woman, we would all have more sense than that!

We have all learned very valuable lessons. Please take heed.

If our people are dressed in their night attire, they must have quick access to warm clothing just in case they have to hurry outside in the cold during an emergency. Since they do not have fur, they catch a chill quite easily. Nothing is more disturbing than a shivering human. We can completely understand how uncomfortable it must be for them especially if they are rained upon.

They also must have their purses, keys, identification and credit cards all in one place so they wont spend time hunting for them, therefore have more opportunity to rescue the important things in their lives, like we cats!

It is best if they have flashlights (or torch lights) in every room in case it is too dark for them to see. Humans cannot see in the dark as we do, and they spend more time groping around in the dark, too.

If you have a laptop, do what Miss E did. She had her computer case in her closet close to her laptop which she unplugged and put into the case, though she chose to leave the cord behind as it was tucked between furniture. She was clever and fast about that. 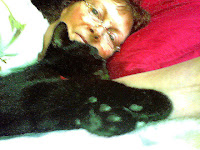 Since she had such a difficult time getting our carriers open in the dark while trying to hold onto us, she has learned that it is best to leave the carriers unlocked when not in use to make any further possible emergency situations run more smoothly. Though, I am a little bit wary about that. Ninja tells me he often has dreams that the carriers will someday swallow us. And if the gates are left open, I think he might have more dreams, and he certainly makes enough noises when he is sleeping already. He must have been through some terrible times before he came to live with us. It seems he is always fighting off some monsters or doggers in his sleep.

That was enough adventure for all of us. Now we are all settling down with Miss E on her bed. I hope she doesn't squirm around while she is sleeping tonight. It is so uncomfortable when she does so. Then, we all have to reposition ourselves all over again!

Posted by Elizabeth Munroz at 1:30 AM