It was one of those days where the Queen must take charge. Miss E left us for the whole day and didn't even return until evening. Poor little Spyder, he was all pins and needles wondering where she was. It was important for me to soothe him and calm him so I took him to the cardboard box that originally held the turkey. Miss E had cut a hole in it and had put some catnip inside. Soon he forgot his worries, ran all over the house chasing Ninja until he tired himself out and fell asleep. I laid down nearby to watch over him, so Ninja would come and bother him. Sometimes they antagonize one another a little more than I like. My preference is calm demeanor by everyone , but I suppose that is expecting a little too much from a Ninja descended from the wild panther. And young Mister Spyder, well, he is still a child, though he will tell you he is not. "him a big boy" he says. Now, isn't that precious?

Since the sun was shiny today I sunbathed in the kitchen window until it went away. Ninja went off to meditate on the last tree leaf hanging from the bare branch outside the back window. It's pretty chilly on that side of the house, but he seems to enjoy the briskness. Spyder stayed blissfully asleep hiding somewhere, perhaps the closet? Oh yes, I remember now. He has been doing this a lot lately. He went off to sleep in my boudoir. I permit him to do so, as he needs some babying once in a while. He kneeds the sheepskin that Miss E has provided me. There's another one just like it on the bed, and another much larger one on the chair. But, I think our young man enjoys the security of enclosure.

We were all delighted when Miss E returned this evening. She greeted us all so happily and then opened a special can of chicken tuna mix and put it all on one dish separated into three servings. How clever of her! That is certainly one way to entice Ninja and Spyder to mind their manners. If we all three are required to share the plate at the same time, then our hunger will outweigh any grumpiness on the part of my two gentlemen cats. Of course, neither one will leave the plate. Each will stand his ground. There is no time for supercilious growling. After all, between the two of them, it is a race to finish, to see who can eat the most until the plate is empty.

I was delighted also because Miss E used her special china. The blue rose plate. It is so pretty and much too expensive to be serving cats upon. However, I am quite aware that she did this because of  my royal status. It was delightful to be so honored. The lady that I am ate sparingly, as I am now watching my waistline. I have to admit, sadly, that it has expanded lately. Also, I have noticed my tummy is a little delicate. Miss E says she is going to get me some Probiotics to help settle it down. I wish we could eat on the blue rose plate every day, but I know she provided this treat for us because she was away from home for so long. She is very wise. If she had prepared the treat before she departed, who knows what might have happened to it with those two ruffians running around. I would hate to see such a lovely piece of china broken.

As it turned out something did get broken tonight. After we finished enjoying our repast, Miss E put the plate in the sink. No. No. she didn't break the plate! As she turned to leave the room, her sleeve caught on one of the bottles she refills with fresh water every day. She uses those glass bottles instead of plastic "to be green", she says. She doesn't look very green to me. She looks the same. I don't think those water bottles are going to make her green. I do like them better myself. Those plastic ones have an unpleasant odor.


Well, I divert, do I not? When her sleeve caught on the empty bottle, it flew to the ground and crashed into a million splinters. Spyder ran away, but soon came back as Ninja began to investigate the damage. Spyder quickly was fascinated by the sparkling shards. I tried to warn them away. I have seen broken glass before when I lived on the streets, and no matter how pretty and sparkly it looks, it has a very dangerous and sharp bite. It doesn't look like it has teeth at all, but it can do serious damage to a kitty's tender mouth and paws. I stared as hard as I could to penetrate their minds with the danger but neither of them paid attention to me. I will have to adjust their attitudes about this later! 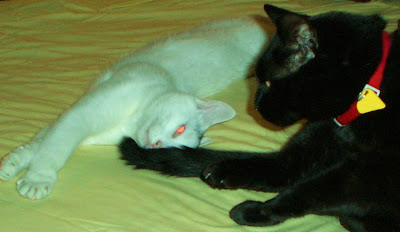 The very second Ninja was putting his nose down to sniff one of those shards, Miss E shrieked loudly and stamped her feet, wildly waving her arms about. She was like a banshee. I told those two trouble makers to get away from the broken glass. But they wouldn't listen to me. No. But, Miss E's tactic worked like a charm. How clever she is! She scared the daylights out of both Ninja and Spyder, as they leaped about 9 feet in a single bound in either direction! Ninja to the laundry room, Spyder to the far end of the living room. Of course, Ninja states he was not at all frightened by Miss E's odd behavior. He was just using that opportunity to practice one of his ninja techniques he learned from his sensei. He called it the Flying Swallow technique. He means swallow, as in the bird, rather than what one does with drinking water.

Once the kitchen was cleared, Miss E swept away the glass and mopped up any bits that refused the broom. Then we all came to bed. The boys are next to Miss E, and I am about to retire to my boudoir, as Miss E would now like to use the computer.
Posted by Elizabeth Munroz at 2:18 AM

Glass is nasty dangerous stuff. Mom doesn't let us near it, if it's broken!

That's why I acted like a banshee. They were all right there with me when it broke.