What not to do when you build a catio if you don't want your cats to go out in the rain:

When the catio framework was first finished, I instantly learned of its considerable faults. We had put down a tarp for a floor over the dirt. When it rained, part of the "floor" had water seep beneath and soon was muddy in that corner. Yes, the carpet got wet. There were other problems I had to fix, too. So, it was clear to me, the catio was not finished. I couldn't hold the contractor responsible because I hadn't thought of these problems that needed further work.  I hope you will from my mistake learn what not to do.


Posted by Elizabeth Munroz at 8:48 PM No comments:

This was my beloved Shadow, who was separated from his mama before he was five weeks old. He hadn't reached maturity yet in this video. He was about eleven months of age. My friend called him an "armpit cat", meaning whenever I laid down to sleep, he would snuggle up to me right in my armpit. He never lost his need to suckle and loved his blankets! I loved this cat so much! But, you can tell, I'm sure, by the way I am writing about him in the past tense, you understand that Shadow is no longer with me. He had a gastrointestinal obstruction, a bowel disease. After several visits to the vet over many months, Shadow made no improvement. Surgery was suggested, but at the cost of several thousand dollars almost as much as my yearly income at the time (2011). I couldn't just let him suffer until the end came. Though it broke my heart, I had him peacefully put to sleep.

Posted by Elizabeth Munroz at 8:13 PM No comments:

Grieving the loss of your cat? I wrote this poem
Your Kitty will always be with you. 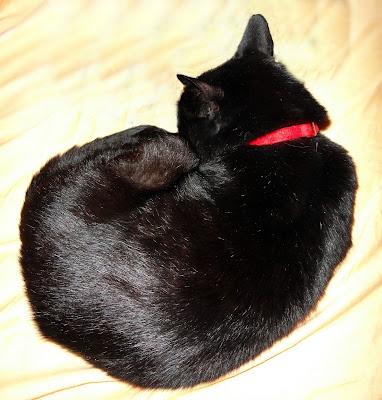 She's the whisper of the leaves
as you walk down the street
and you remember her fascination
with them falling through the sky
like tantalizing birdies.
She's the smell of bleach
in your freshly laundered sheets
as you recall the hairballs
she made on them.
She's the soft paw
on your brow
when you're not well,
the gentle
(or not so gentle)
purr in your ear.
Your kitty lives
inside your laughter,
and she's crystallized
in your every teardrop.
She's the place
you came from
when you picked up
the pieces of your life
as she moved into your home,
and she's the map you follow
with every trip
that you have taken
into each new future adventure.
She's your love and your heartbreak,
and nothing on earth can ever separate you
-not time, not space, not even death
Your kitty will always be with you.
Elizabeth Munroz
1 Oct 2001
(Inspired from "Your Mother is Always With You")

ENJOY!
*
Posted by Elizabeth Munroz at 12:41 AM No comments: 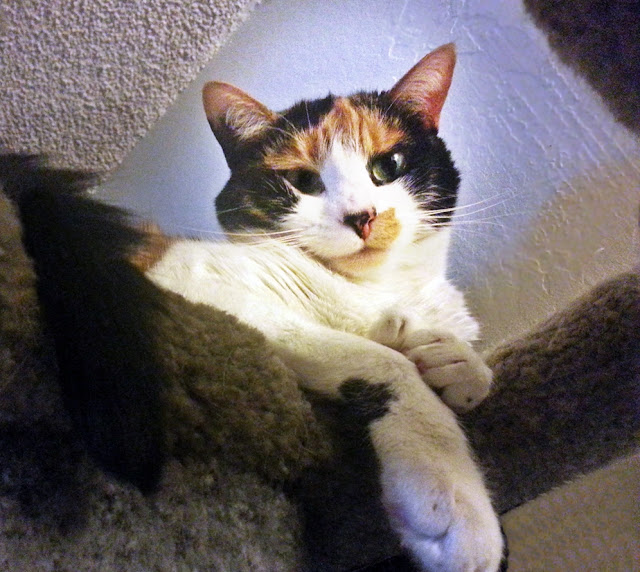 In order to get to the top, Miss Buffy has to climb up through a hole. 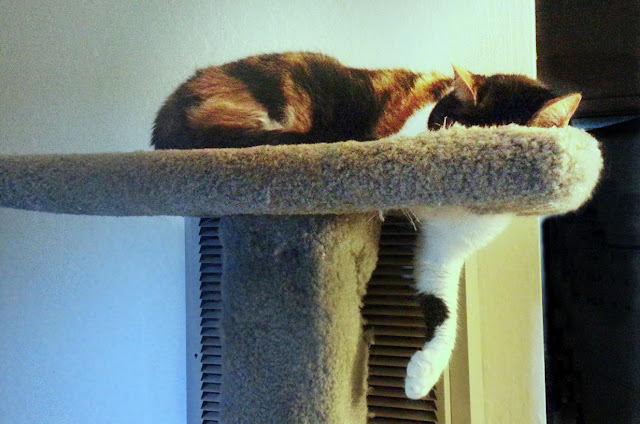 Sometimes she forgets the hole is there and starts to fall through. 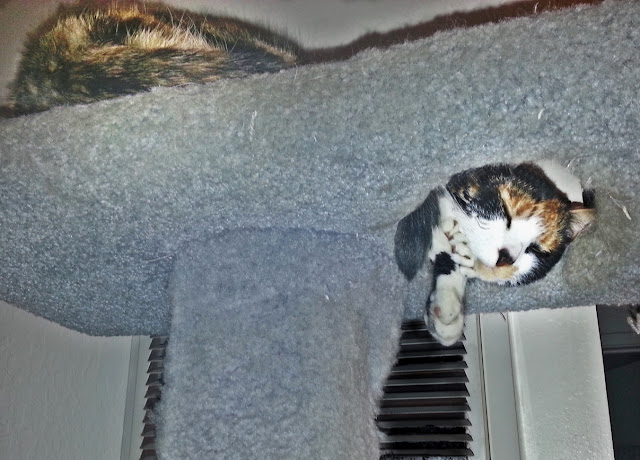 But she catches herself every time,
Even if part of her still hangs through, 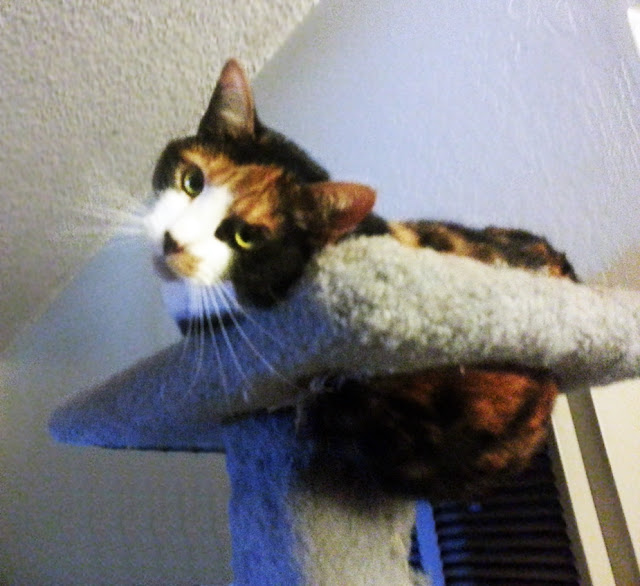 Buffy da Bampire Flayer loves to be at the top.
Posted by Elizabeth Munroz at 1:04 AM No comments:

Timmy can hardly wait til Christmas! Bring it on, Santa Cat! 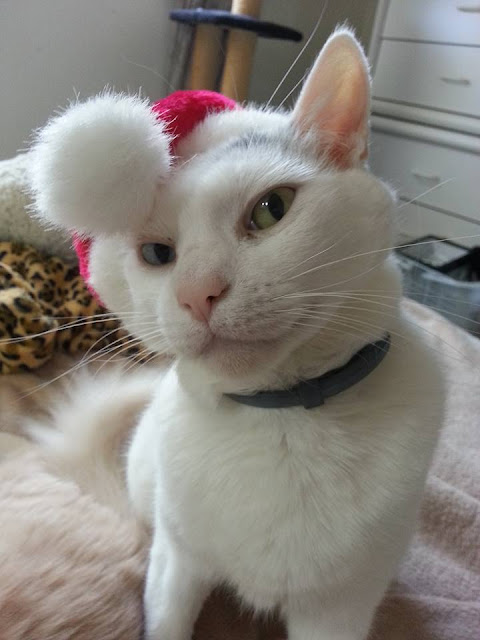 Posted by Elizabeth Munroz at 12:05 PM No comments:

The Great Pink Hunter has captured a feathered critter toy!

Don't come near or he will fiercely GROWL you away! 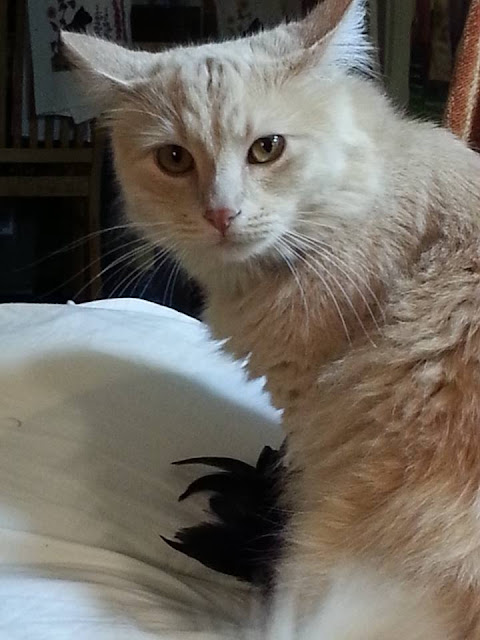 Posted by Elizabeth Munroz at 11:51 AM No comments:

The birds are harassing the cats today!
Queen Bambi got so excited she body slammed the catio door!
Wish I could have caught it on camera. But happened too fast.
This is the aftermath when Pinky came over to see if she was okay. Bambi is reassuring him 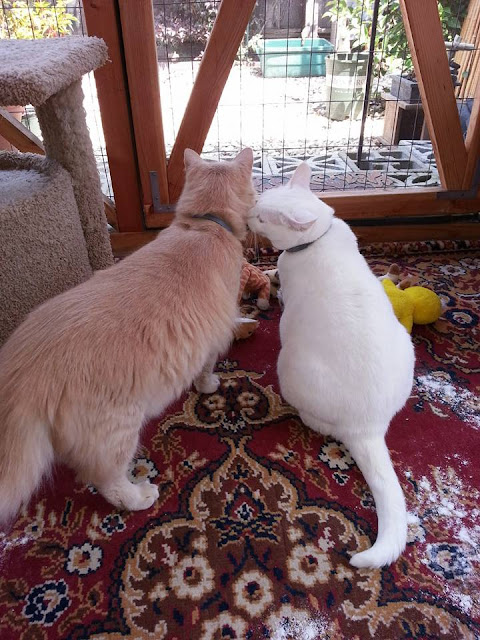 Posted by Elizabeth Munroz at 11:53 AM No comments: 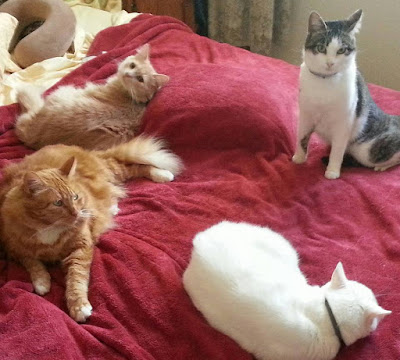 Where do I fit on my bed?

I slide in on the edge where Sunny and Timmy are, then gently push my behind toward those same interlopers. They shove over unwillingly and sometimes just get up and get onto the same spot on the blanket they were already occupying on TOP of ME!

No wonder I wake up all achy! But to be fair, they don't stay there all night. Usually after they get some pets and treats they leave the bed. Sometimes I can't figure out where they are hiding all night long. But, by morning they are back to climb over me to wake me up. Just like real kids!

Sunny-Boy on the bottom left. Pinky above him. Georgie above right and Timmy, bottom right.

My cats get along amazingly well. I introduced Timmy as a kitten to adult Bambi in 2009. She mothered him until he became an obnoxious teenager, when I introduced kitten Buffy who Timmy adopted. They were playmates for about a year. They are no longer close, but tolerate each other just fine. They cross each other's path and only Buffy gives a grouchy growl. She doesn't seem to like anyone. But, she is a calico after all. And they have a reputation for being cantankerous!

Then, there were two kittens who lived with us for a few months, no longer with us, that Timmy adopted and loved on.

Then, Ninja (the second), a black cat who was added to the menagerie. He was easily acclimated. He'd had previous contact with a lot of other pets in his two years. 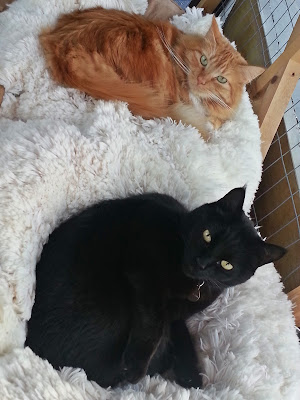 Then I adopted Sunny-Boy. Being so quasi-feral, he became Ninja's best buddy and love interest. (Yes, cats can be gay).

But, Ninja got outside one day and never came back. The animal control had picked up his body about a week later. My heart was broken, and Sunny missed his buddy so much. He would meow for him at night out in the catio. Almost as if he were calling for him.

Eventually he settled down. But still he does a little bit of calling, now and then. He carries around a little stuffed animal when he does that.

So Sunny began to relate to Timmy and mothered the new bottle-baby kittens I adopted last October, one of which was Pinky. The following week I rescued Georgie off the street after he was thrown from a car window right in front of me! Since he was sick I had to keep him in the bathroom for months.

The other kids tolerate him quite well. Though, Sunny gently smacks him on the head when he has no manners and is too intrusive,. Then Georgie lies down and rolls over for him to apologize. Then maybe he will get a forgiving lick on the face from Sunny. Pinky loves him as a brother and they play all the time. Though Georgie is about two months older than Pinky, he is outweighed by several pounds. Pinky is such a chubby boy!

Timmy nuzzles and licks Pinky now, and so does Sunny and Georgie. He's still everybody's baby. Unlike some cat households, I think it is just luck that they all get along so well. Or maybe it's just the careful way I slowly introduce them. I never have flying fur, except from Timmy who sheds enough for all six cats!
Posted by Elizabeth Munroz at 1:09 AM No comments:

Wow! So cool! No doctor appointments today! No errands to run!
I don't know what I'll do with myself!
I guess I'll just sit here and stare at beautiful "Tortico cat", Buffy 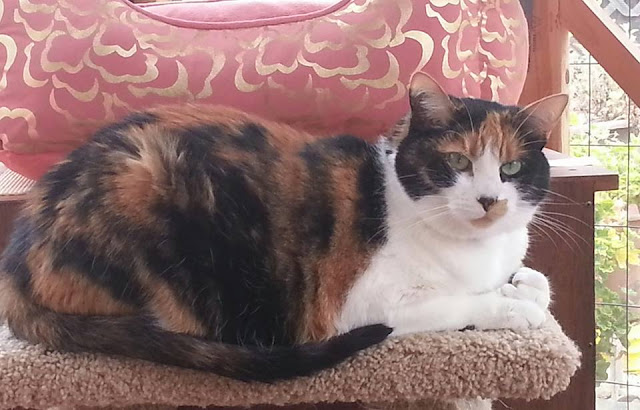 Posted by Elizabeth Munroz at 12:00 PM No comments:

Timmy says, "Boys can wear pink if they wants to!"
(Especially since the pink suede jacket was a free pick from the SPCA donation box!) 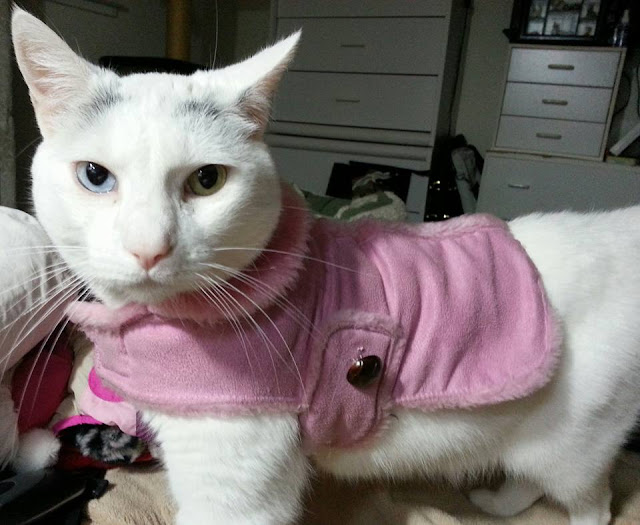 Posted by Elizabeth Munroz at 12:58 PM No comments:

Hummingbirds Outside the Catio

Entertainment for the cats!
The hummingbirds do not harrass the cats (so far)!
The cats don't bother the hummingbirds. They stay still as statues!

Posted by Elizabeth Munroz at 1:09 PM No comments:

Morning Tea in the Catio.


Earl Gray Tea with ginger, honey and Meyer lemon (fresh off the tree). 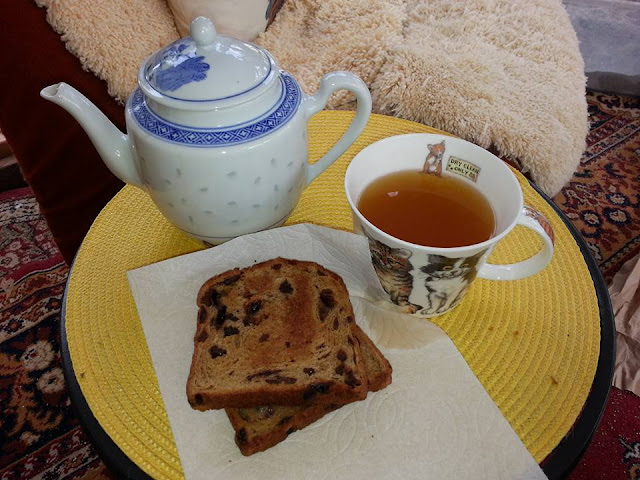 Queen Bambi stretching out. She never falls off the edge! 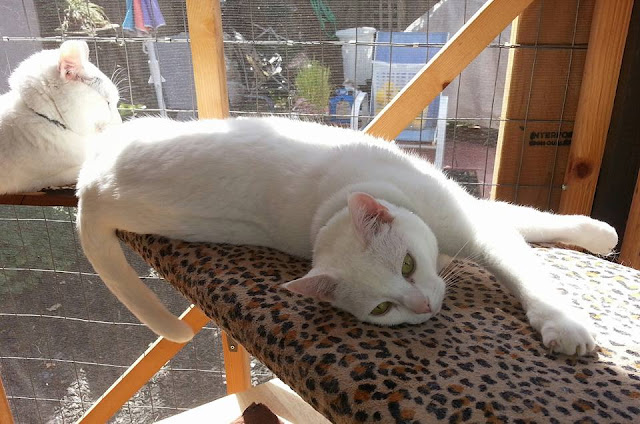 Watch out Timmy!
While you're intent on watching the birdies your furry belly is in jeopardy!
It doesn't fit that skinny shelf! 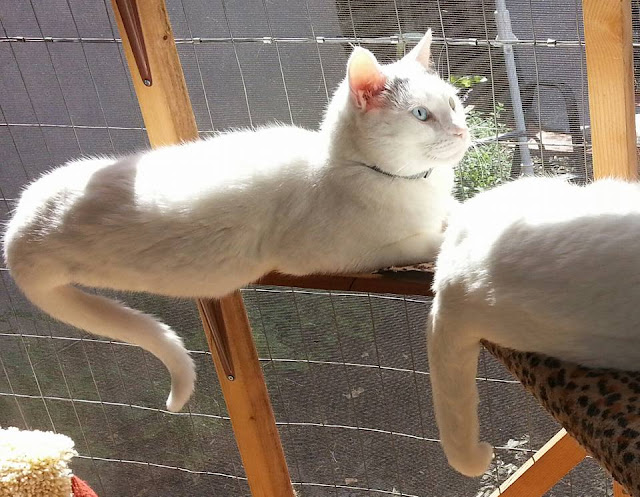 Posted by Elizabeth Munroz at 1:20 PM No comments:

Posted by Elizabeth Munroz at 1:51 PM No comments: 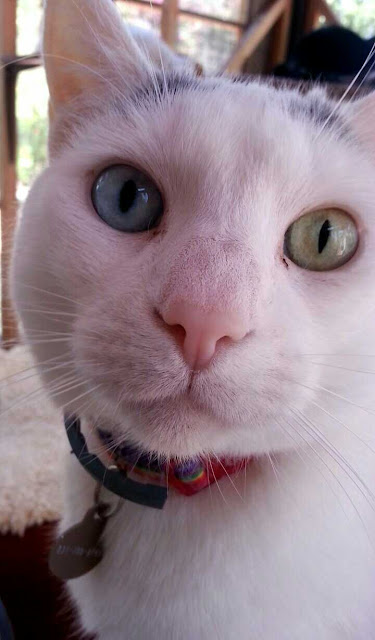 Timmy says good morning! May I have some of your tea? No? Then why do you come into the catio every day this way?. It's torture, you know, when you sit there having toast and tea without offering us a treat too! Oh cruel cat mom! Note: Timmy says this while standing on my lap! Standing! I say! He weighs a ton!
Posted by Elizabeth Munroz at 10:45 AM No comments:

Bambi and Buffy have an altercation. 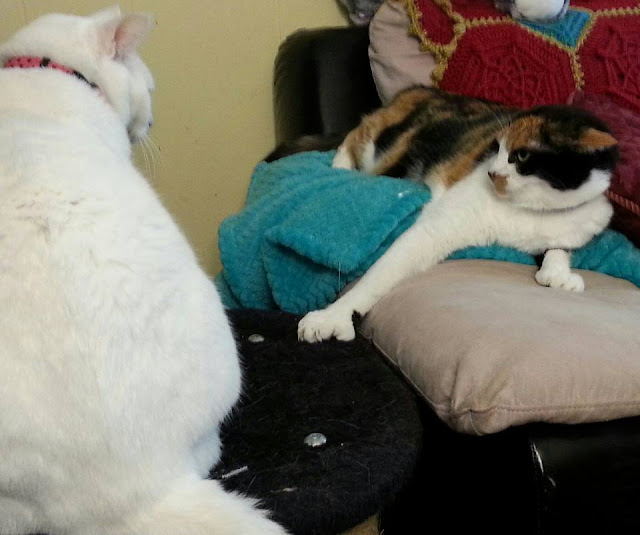 Posted by Elizabeth Munroz at 10:52 AM No comments:

Posted by Elizabeth Munroz at 10:59 AM No comments:

Quiet Morning in the Qatio

Morning tea in the catio with Earl Grey double bergamot and Georgie Porgie. 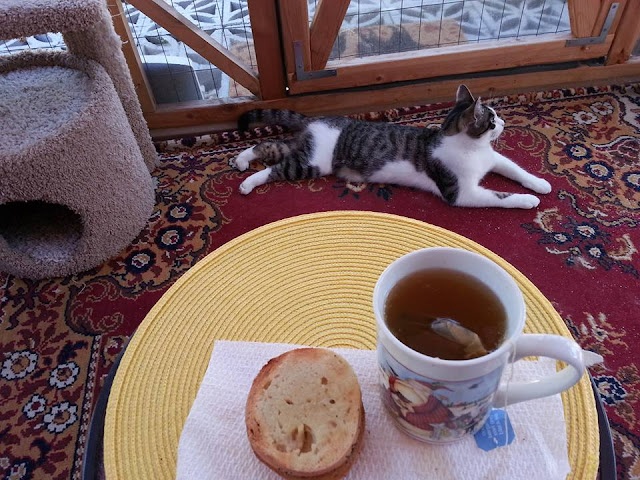 Posted by Elizabeth Munroz at 11:03 AM No comments:

Pinky staring at the leaves scattering in the darkness.
Or was that a mousy? 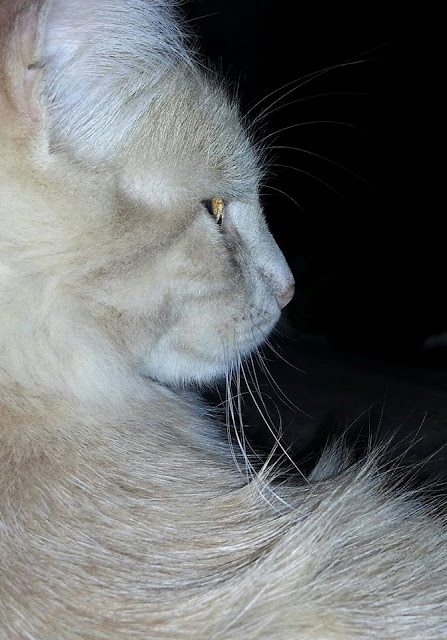 Posted by Elizabeth Munroz at 11:17 AM No comments:

House Panther in the Jungle 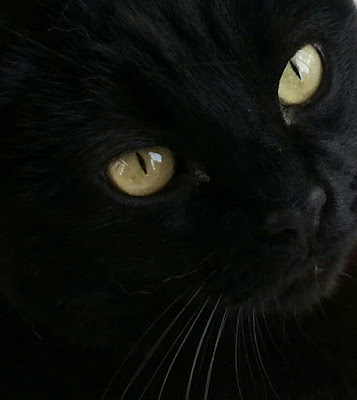 This is my handsome house panther, Ninja, who has a problem. He is behaving like he's living freely in the jungle.

Every so often he does not use the litter box. He chooses instead any receptacle made of plastic, such as an empty laundry basket, though there are plenty litter boxes about the house.

He has also occasionally peed on the guest bed, and a couple times on the carpet. I had to replace the mattress. It was so unsalvageable. The carpet, I used a product that removes the stain and odor.

I hope this doesn't turn out to be a medical issue. ManCats do have problems that way. It can be quite painful for them, and quite expensive at the vet's to treat it. If it's a behavior problem, I am still trying to figure it out.

Could be because his first two years were spent in a van with a homeless family. As he grew up, he got to have more freedom and often went outdoors to play. Perhaps he finds being confined to the house too stressful. Or maybe I'm not cleaning out the litter box often enough. Or, maybe it's the brand of litter I'm using. Or just plain stress? 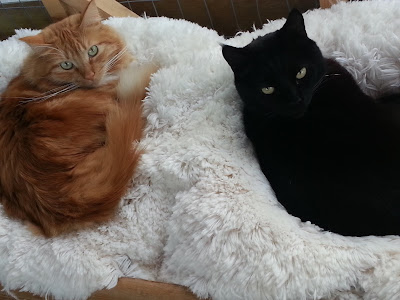 I don't know how I can work with this, aside from letting him be an outside cat. My ex-feral, Sunny-boy is very attached to Ninja and would freak out if they had to be separated. I don't dare let Sunny be an outside cat. He is way too skittish. He would be miserable. My plan right now is to get another large litter box and add it to the ones I already have. My litter boxes are actually large plastic file boxes from the business supply store. They are much deeper than a regular litter box and offers a bit more privacy and less tracking of litter outside of the box.
Posted by Elizabeth Munroz at 8:52 PM 3 comments: