Hey there Dudes and Dudettes! This is the Ninja blogging. We have had an awesome day. Well, parts of it anyways.

What's not so awesome? Elizabeth has put me on a diet. It's impossible! I love to chew on dry food, a lot, but not this cardboard stuff. Funny thing is, that little pipsqueak, Spyder, loves the stuff. He comes and nudges me away anytime E puts the bowl down for me. Well, he can have it! I'd much rather have those sweet little niblets made especially for kittens. You know. The stuff that's chock full of calories to provide maximum growing. Yeah, that stuff. I love it!

Before, E was feedin Spyder and Bambi up on the table by the window. She thought I wouldn't fit up there because of the big ol' lamp sittin on it. But, I'm the Ninja! I am the sneaky one. Whenever she wasn't lookin' that was when I was up there enjoying that special kitten food.

But, now, alas, she has changed things around. She's feedin' those two in the spare room. And feedin' me in the kitchen. She thought if she did that, then we would all eat what we were supposed to. But, I had her fooled again. She thought I was too fat to make my way up on top of the computer cabinet and get to those two bowls. Even Bambi and Spyder didn't know that's where she put them when they weren't looking. But I saw her and it didn't take too much effort to get up there. It was a bit treacherous, but it was worth it to get that kitten food.

She finally got to serving those two for 20 minutes then locking their food away in the cabinet. I cannot get the doors open. Phooey!!!

She thoughtfully put a whole open feeder out in the garage for me to have access to my food anytime. But, I really don't like to eat it. Did I already say that? Right!

Bambi and I can go through the cat door to get out there for our litter boxes. But, little pipsqueak hasn't figured it out yet. He thinks we just magically disappear. It's just as well that he can't get out there, otherwise he would be eating my diet food! I don't know why he likes it so much when he has that delicious stuff. He eats that enthusiastically, too.

I shouldn't complain. I do eat it, and I have become a bit slimmer. I must admit. And I find that I am friskier, too. I have even been playing with the mice lately. Though I make sure those young ones don't know it. I play when they aren't around. Plus, I do find that I feel a lot more affectionate towards E. And as long as those two are locked in the other room enjoying their 4 meals a day, I've got her all to myself. And, we sure do get some cuddling in then. See? Now, that's awesome! 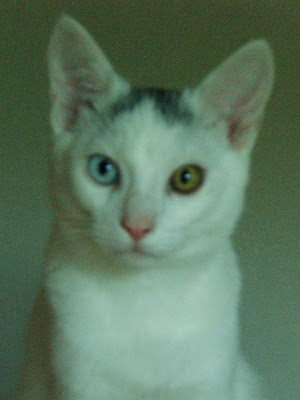 This is awesome! E did an odd thing today. She took Spyder away in the carrier and they went for a drive. He didn't even have an appointment. She told him she just wanted him to enjoy the car. They were gone for hours! When they returned, Spyder told me he wasn't scared at all. I believe him. He is quite mellow about the car. That last time, he just went to sleep.

But, one thing that bothered Spyder was that when E drove up that steep hill, he started to freak out. That's the same steep hill where Jeffrey got all excited and tried to claw his way out of his carrier and got sick, and you know the rest.

Spyder tells me he doesn't really understand what made him get upset. He really had been enjoying the ride up to that point. He says after they went past the place where Jeffery was upset, then Spyder wasn't upset anymore. How odd! Don't you think?

I asked him if he got upset because he remembered this was where Jeffery got sick. I asked him if he could smell the forest that got burned last year. Did that upset him? He's just a little kit and doesn't seem to get it. He only knows that he didn't like that one part of their drive, and suddenly he was crying out. He didn't know why.

I think there must be some primordial built in radar that we cats have. That something special that lets us know when there is danger. Whether Spyder was remembering that was where Jeffery got upset, or whether he smelled that danger of the old fire, it doesn't matter. We just got that extra something that makes us sensative.

When they returned, E had a plastic bag that had a treat for us, two big feather boas. I watched as she pulled them out of the bag. They were so excited to play with them. Even some of the feathers came loose. But, you know, they aren't as interesting when they are just laying there not doing anything. Finally, E put them away. Later, Bambi discovered the bag hanging on the doorknob. She shredded the bag with her claws!!! I know how sharp her claws are. She snagged me on the nose the other day.

Anyhow, after shredding the bag, of course, the feather boas fell out and Bambi had the time of her life. The kitten was in the other room snoozing on the bed. Otherwise, he would have been in on it, too. I have to admit, I was a bit relieved when E caught on. I'd like to see the boas last for a while so I can play with them, too! 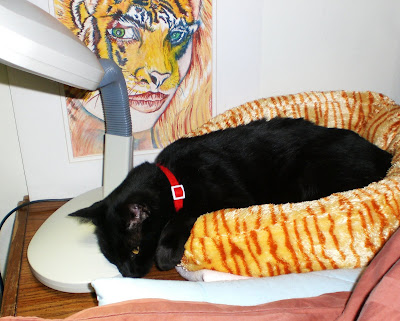 All that ruckus tired me out, so I climbed up on the bookcase headboard above the bed and curled up to sleep on my bed. I know I snore because E nudges me occasionally and tells me so. This time that little pest didn't come to bother me so, I must have gone into a deep sleep.

The next thing I knew, I was falling in between the headboard and the dresser. I even bumped my head! I was not in the least bit ready to fall on my feet. It was a terribly clumsy thing to do, but I was helpless. Dead asleep, and boompt, there I was sailing through the air, and kerplunk on the floor, bedding and all.

I must have stretched out my legs and pushed myself, and maybe then, the bedding just slipped across the headboard and there it went. I really was dazed for a while, and E made a big fuss over me. I was so embarrassed in front of those two white cats that I went into the living room and hid behind the curtain in the window for a while.

This was absolutely the least awesome part of my day.
Posted by Elizabeth Munroz at 2:36 AM

What lovely adventures you all have ~ we (me, Milo and Alfie) love reading about them.

It's strange about Spyder having fear in the same place as Jeferey ~ we think she was remembering/picking up on his upset and that he then went away. We hope she got extra hugs on her return.

Spyder will travel again soon and we shall find out if the burnt forest is haunted!