Eight Years in the Life of a Ninja 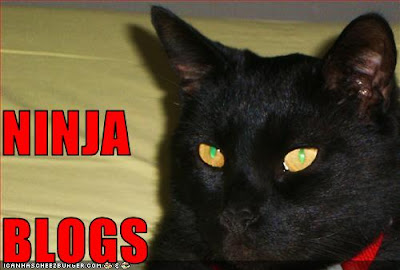 re I am another year older, and wiser, I like to think. We had a great party today and celebrated with a tuna cake cut into three parts. There were no candles on the cake. Miss E doesn't believe in having candles. She thinks they are dangerous. That's okay by me. Though candles can bring about great states of relaxation by staring at them. I can stare all I like in relaxations without candles. I rather like the warmth of the stained glass lamp shining down on my fur. I don't think a candle can do that.

The years have passed by in a blur. I've had a good life. I can't complain. The only life I ever knew was with the couple I lived with and those two dogs. 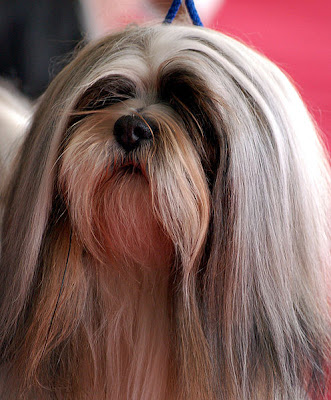 Dolly told me she is from a long line of sacred Dolly Lamars from Tibet. She is the 123rd in her lineage. She was very wise, but very sometimes hard to understand. She spent a lot of time chanting in some ancient gutteral sound. Once she was quiet, if a bell rang, she would start up again. It sounded like "oooooommahneeepadmeeeeehoooo" I think there was something about her background or training that was set to bells. if the door bell rang she would start up. If I jingled my collar bell, she would stop, and then if I jingled it again, she would start again. So, I tried not to jingle at all. That was one of my first lessons in becoming a Ninja. Being silent in my stealth techniques.

The other dog was an Akita. He was huge! His name was Kain Doshi, but our people just called him Doshi. He claimed to be a warrior monk of the highest caliber and an expert teacher of Ninjutsu martial arts. I called him Sensei, which means teacher in Japan, where his ancestors came from. Though he was large, he was quiet compared to Dolly. He really knew how to just sit, and be. I learned a lot from Sensei. 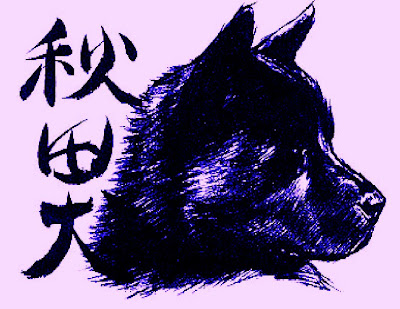 iss those two. But when I was living with them it could be very difficult to get through a day with both of them on my tail to learn this lesson and that. It could be very confusing, since both had different points of view. Yet, they were united on their goals to train me to their "Way". Unfortunately for them I am not a dog and could not fit into their "pact". Fortunately for me, I am a superior black cat who has taken the best of their knowledge and put it into practice. Even they could never reach the state of being one can reach in the practice of "Stillness". I am actually quite excellent and can hold that pose for a very long time. No dog I know of can keep stillness for that long, always being distracted by people calling them, responding to whistling, and cars driving up to the house, and so on.

I do miss them, it's true. I miss the couple, too. Even though they were always yelling at me.

"KOBE!!! Get down from there." I had to get away from my incessant but well meaning teachers. Didn't I? How else was I to do that but by sitting on top of the refrigerator?

"KOBE, Come here!" What did they think? That I was a dog and would come running when summoned? Excuse me, even a tough guy like me has a sense of dignity. Besides I had no idea they were referring to me when they were shouting KOBE, KOBE, KOBE all the time. Dolly and Sensei showed me that when they are shouting like that to go hide and whimper, usually under the table. But, I would never go under the table with the dogs. I couldn't stand the whimpering. It was just too high pitched for my sensitive ears. So, I would go hide somewhere else. The couple thought I was "aloof", and seemed quite happy to leave it that way, as the dogs were happy to lick their faces all the time. That left me plenty of time to practice my Zen skills.

But, that last yea 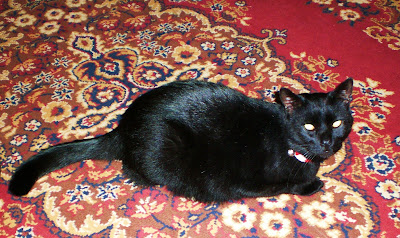 r I lived there, the couple were always bickering. I was almost relieved when we were all put in our carriers and taken to the shelter. Dolly swung into her chanting continuously that whole trip. I felt sad that my own Sensei would howl like a common dog, then too. It was quite painful to be in the middle of that. I was so relieved when we were separated but I didn't realize I wouldn't see my teachers again. That is one thing they were sure of when we were traveling in the car. I had blocked out all their noise, but they Knew it was Good bye.. Sayonara because that was part of their last messages to me.

At the shelter nice man took me out of the carrier and "inspected" me, saying I was in perfect shape. Of course, I was, even though I was already seven years old. They say that is 45 in people years. I suppose that is venerable enough for me.

So when I came to live here and was called KOBE, I turned and went in the other direction. It didn't take long before the Monk recognized who I really was, and pointed out to Elizabeth that I was truly a Ninja. He is a very smart man, and a brother in the monkhood so to speak, as it seems he can be "still" in the midst of chaos, too. And even though he has an innate fear of cats, he is able to maintain his integrity by his own zen practice. It seems that Keli, the Dowager Queen was his first teacher of cat acceptance. Though, I have noticed, even though he is able to pet me, he has never attempted to pick me up. I recall, though, that he would let Jeffery sprawl himself out from head to toe on his lap on occasion.

Now that Keli and Jeffery are gone, I have a lot of responsibility around here. First and foremost, I guard over the household by keeping my post at the head of the bed on the bookcase headboard. Then, of course, I must be a good example and older brother to Bambi, though she has little respect for me when she chases me about. I guess I still have a lot to learn about patience. And now that little Spyder has joined us, it is imperative for me to let him know who is boss around here, and teach him some manners. Though Bambi insists that she will take care of raising him in the Way of the Cat. 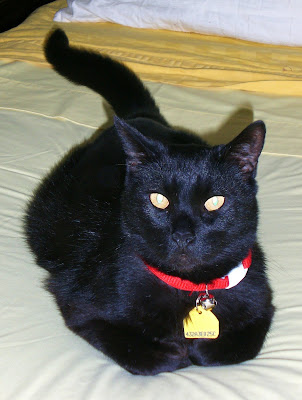 I know one thing for sure. The past is the past, and it is done. That is the way of the Zen Cat. The future with Bambi and Spyder is yet untold. Though, I may attempt to influence them with my abilities and powers, we may not always see eye to eye. Worry not, I say to myself. The future is the future, and it is not this moment now. Spending this moment now worry, is not living. It is worrying. For right now, I will just be and live the moment.

Happy Birthday to me.
Posted by Elizabeth Munroz at 2:37 AM

Happy birthday Ninja. Yoo are very sensible to live in the now and let the future take care of itself ~ after all worrying abowt it won't change it.

Thank you Milo and Alfie. It's good to know there are other kitty's out there who understand!