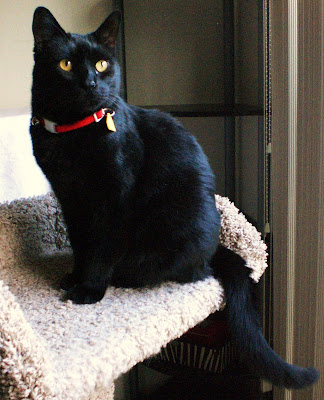 There is a fragrance upon the winds. I am familiar with it. I recall it from when I was a kitten. It means the rains are coming. I am looking forwarad to it. It has been too long. It will be interesting to see what Spyder's reaction will be. He hasn't lived long enough yet to know what is rain.

Ninja and I have been discussing it. Such a nostalgic conversation for him. He has been through seven rainy seasons. He was so reminiscent of his first rainy season. He was but a kitten then, like Spyder.

Ninja tells me about one time when he was living with the dogs that he went outside. He intended only to look around, but the wind blew the door shut, and he was left outside to get soaked to the skin, while he tried his best to hide from it. His people were looking everywhere for him.

He waited for them to find him but they never did. Finally they let the dogs out and thank heavens the dogs had enough sense to sniff him out. And he got to go back inside, then. 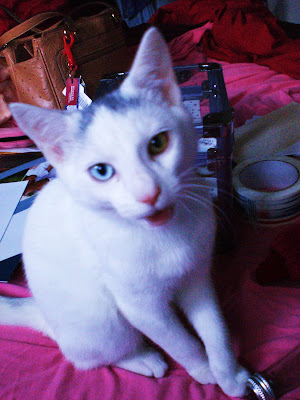 The last time the rainy season began is when I had my kittens. It was damp all the time and I tried to keep them warm. I know I was a good mother, but then one day my kittens were gone and believe me, it was the saddest day of my life.

That is why I'm glad Spyder is in my life. Though he is not my kitten, I sometimes feel like he is. Spyder is all excited listening to us talk about the rain and can hardly wait. He will be in for a surprise don't you think?

Isn't he adorable with that look of anticipation on his face?
Posted by Elizabeth Munroz at 6:28 PM

I love the rain too, especially when I'm inside and it's sliding down the window pain and I can hear its beat. I love being out in it to as long as I'm dressed for it. I like hiding under an umbrella as I walk along.

Milo and Alfie don't like getting wet ~ they sit on the back doorstp and just look.

I can just picture you and your umbrella. Too bad they haven't invented rainboots and umbrellas for cats. I think they have them for dogs!