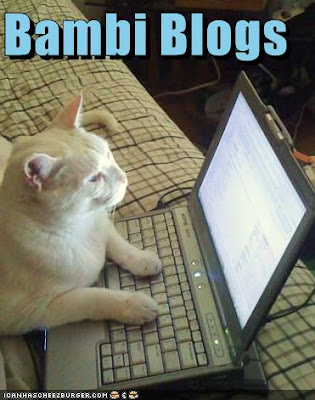 It breaks my heart to see Spyder getting his treatment for his eyes. Though Elizabeth is very careful, I have never seen Spyder so frightened. I couldn't watch it disturbed me so much. I sat in the hall, though and listened. If it was me, I probably would have shredded her up before I let her do that to me.

But, I have to admit she handled it admirably. She went and got all the medicines together, opened them and set them on the table beside the sofa. Last time she did it in the bedroom but I think she does not want Spyder to associate the bedroom to being hurt, so changing locations seems like a good idea. She also got the Q tips and put them on a plastic bag so there would be less contamination.

Spyder's eyes have an inflammation that produces a drainage, which gets very dry and sticks to the inner eye near the tear duct. This just blocks the tear duct and makes things worse.

Elizabeth has an old red nightgown, a very pretty color I might add. Contrary to what humans say, we can see some colors and red is one of them. Her night gown is made of soft t shirt fabric which stretches and she wraps it tightly around Spyder, but because it has some give to it, he is not so tight that he feels strangled. She holds him like a human baby and speaks gently to him in human talk, then she makes good kitten noises to him to soothe him. Soon he relaxes and does not struggle. 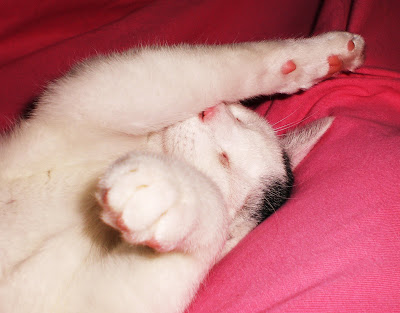 But, then comes the part I don't like and I could tell by the stressed breathing that Spyder didn't like it either. Oh, he wasn't making a big fuss. He is a really brave boy. But, I know he wanted to cry. Yes, we cry too, just in a different way than humans. So, Elizabeth has to put drops of moisture in his eyes while holding his head in a certain position. At the same time she has to hold the eye open enough for the drops to fall in there, as Spyder is really good at closing his eyes up real tight. But once she got his eye open she let him see the bottle of eye drops coming toward his eye slowly. She didn't try to do anything fast or careless. And he remains calm enough that she can get the medicine in.

Then she has to wet the Q-tip and gently and slowly twirl it near where the drainage is built up. If the moisture drops havent softened it up then she has to add more drops. Finally when this is clear. Then she has to administer the prednisone drops. I heard her telling his she understood how it felt as she had to take this medicine herself and as I peaked around the corner I thought I saw a tear in her eye as she picked up the next bottle.

Now I know that next medicine must have burned had to hurt real bad because at one point Spyder called out, "ma ma". Elizabeth stopped and cradled and petted Spyder until his breathing was back to normal. She made all the right mama cat noises at him and he was soothed. I didn't know she knew so much of our language. I am pretty sure she doesn't know what she is saying but she sure can imitate the sounds well enough that it soothed Spyder almost to sleep. Unfortunately she had to open the other eye and put the antibiotic drop in there again. 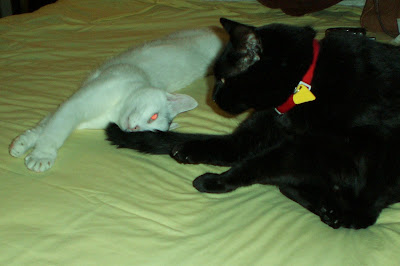 Even Ninja said, It broke his heart to know Spyder has to be treated like that, but we are sure it is necessary, otherwise if things progress, he might end up blinded. And we can't have that for our pretty little boy. One blue eye and one gold eye should not be blind eyes.

When Elizabeth was finished she opened up the nightgown and gently lowered Spider to the floor. Ninja took the boy into the other room telling him what a master he was becoming. Spyder was very happy to hear that. Ninja told him he was proud of him, and someday he would be the perfect model of a cat. That made Spyder so happy that he initiated a game of tag right then and there. After they played they went to lie down and rest. Spyder is looking up to Ninja now and it is good.
Posted by Elizabeth Munroz at 2:37 AM

Oh poor little Spyder. But we do know Elizabeth is doing her best for you. It's hard for her too.