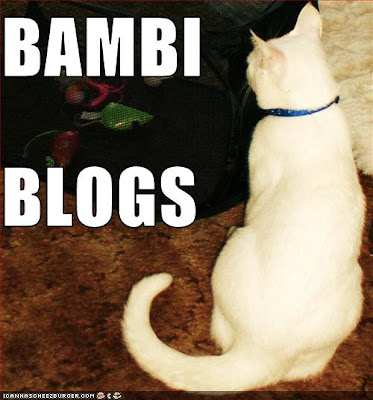 I have been a bit shy lately, well, maybe just reclusive. A lady needs her peace and quiet... time to meditate, to go inward, to experience my true self. Ninja says I am becoming Hikikomori and will inherit loneliness if I continue. I don't think he understands me.

On Sunday, Ninja and Spyder were possessed by inordinate excitement. The Monk and Elizabeth went away for several hours leaving us to fend for ourselves. Of course, this is the natural way of things. Or it should be. However, Ninja and Spyder are getting earnest in their attempts to establish dominance. I know this is supposed to be the natural way, also.

They seem to forget that I am sovereign here. Ninja may act like he is going to run the family, but if he plays too hard with Spyder, then I don't even give him warning. I immediately attack. He never stands his ground with me. I respect his great age and wisdom, but I wonder about his claims to being a Zen Master. Ninja may want to be top cat, but as soon as Spyder gains some maturity, the two of them will have to face off. I suspect that Ninja might not be entirely satisfied with the results.

The two of them tire me ou 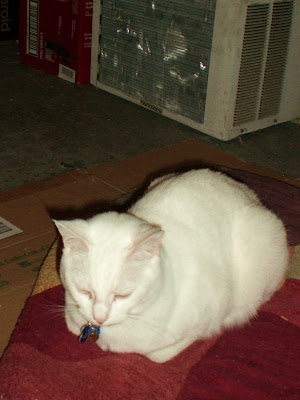 t having to referee their little territorial disputes. Can't we all just share alike? I am unable to relax in my boudoir. Spyder doesn't recognize my private boundary. What's a lady to do? While they amuse themselves with their games of Charge and Slay, I retreat to the garage through our personal kitty door. There is an old piece of carpet out there convenient to our litter boxes. I hate to admit it, but it's the only place I can get away from the two of them. As long as Spyder doesn't discern how to pass through the little swinging door, I will only have to temporarily interact with Ninja. And if he enters the garage, I know he's not coming for a visit, so I return into the house. There are certain things a lady just doesn't need to see. A lady needs her privacy!

I was so glad when Elizabeth and the Monk returned. Then, Ninja and Spyder could vie for their attention. After the Monk left, Ninja went to lie down on his spot on the headboard, only to discover that his bedding had fallen upon the floor, probably due to their rowdy behavior. Sigh! I suppose boys will be boys.

So, Ninja decided to lay at the foot of the bed. This disturbed both Spyder and I. We didn't know what areas to claim as our own, because now they were overlapping. I just didn't feel like I had enough room to nuzzle my sheepskin and get a good knead going. 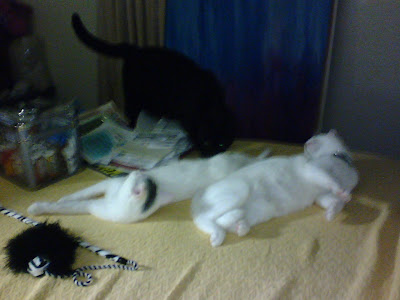 As it turned out, Spyder and I ended up being crowded together. I don't mind, but every time Elizabeth moves around when sleeping we get jostled. And she does a lot of tossing and turning. I wanted to go back and lie down in my boudoir, but the door was closed, so I just went and sat in front of the door. I'm sure Elizabeth was mortified when she found me out like that in the morning. She picked me up and cuddled me. But, I was not about to forgive her right away. Thank heavens she doesn't insist on holding on to me when I am feeling this way! So, I went in to have some privacy.

Yesterday, I expected the three of us could have some comfortable confined social time together. We all have our established places in our room and when the door is closed we are quite cordial. We all usually nap at this time. However, when Esther came to visit, Elizabeth forgot the close the door. She might have remembered if she had stayed, but she had to leave the house while Esther did her work, which is very noisy!!!

I think you get the picture. I can't even go out into the garage, because the dryer vent is out there and the wind whistles through it so violently I get very uncomfortable. I then, retreat to my window.

Spyder and Ninja were affected by all this cleaning, too. I am thankful, at least that there are no chemicals to stink up our environment, to burn our eyes or insult our noses. But, I do wish Elizabeth would remember to close us into our space before Esther visits. That way, all that noise and clamor can be muffled. Then we only have to deal with it towards the end when the cleaning has to take place in our room.

The boys were pretty skittish from all the prolonged turbulence, after Elizabeth came home. It is different when the are creating the swirling energy than when machines and people are stirring things up. Since they couldn't relax, she was not able to relax either. I think one stress tumbles over another until it all clumps into one big vibrating mass. The whole house is filled with it.

Cleaning house day may clean the house, but it makes the home filled with stress if we are left to cope in the middle of it. Sometimes I find messy house to be more tranquil. Many more hiding spaces that way. I made sure Elizabeth know how distracted we all were by hiding in the garage a very long time. Finally, she got the hint, and brought my boudoir into her room and placed it on the middle of her bed. This was a very good solution to the problem. It made a statement to the boys exactly who is reigns here, and shows them both which side of the bed on which to sleep. Unfortunately, as I have mentioned before, Ninja has a terrible snoring problem. There was no way I could spend the whole night with him thundering away. A lady should not be required to tolerate it. 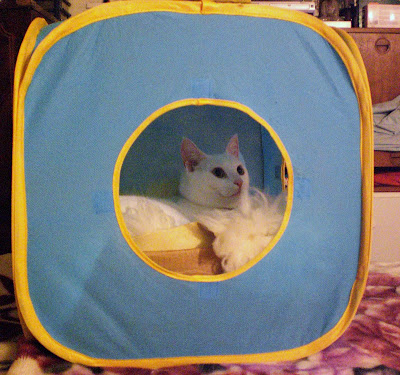 I got up and went to sit by the door. That wasn't enough, at first, for Elizabeth to notice. So I reached under the door, curved my paw up underneath and "gently" yanked on the door so that it rattled, quite admirably, I must say. I continued to do so until Elizabeth became conscious of my message.

She does read me fairly well, but I wish humans could speak our mental intuitiveness. Then it wouldn't be so necessary to create such major efforts to make ourselves understood. I have to give her credit, though. She tries!
Posted by Elizabeth Munroz at 6:37 PM

What a lovely post. There's nothing wrong with being reclusive now and again ~ we all need time to just "think" sometimes.

I knew there would be some like minded gentle ladies out there. I am not alone. You see? I can be alone, but we are not alone. Thank you, kindly for the quotation, dear Jan.