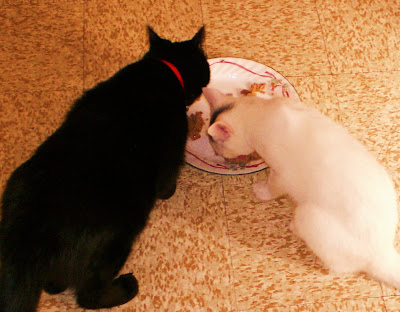 It's been a challenging day. Elizabeth wasn't feeling well and so the whole morning was wasted. It's not like we sit around waiting for her to play with us. But, life does seem to be more interesting when she is around.

She has been feeding Spyder and I in the spare room and shuts the door so that Ninja will not come in and eat our food. I wouldn't mind at all if he wants some of mine. I eat so little and always leave a some left over. That's what a lady does. Later, when we have finished all we are going to eat, she takes our bowls and puts them inside the armoire. Even I have not figured out how to open it, and Ninja is hopelessly clueless. He still thinks he would find a tasty morsel up on top of the armoire. She also locks our bag of food in there. Smart! She noticed that Ninja had started to scratch a hole in the bag the other day as it was kept in the kitchen. So, now, Ninja hasn't much chance for cheating on his diet. Poor thing! But, I must say it's working. He is beginning to be more active and getting a little bit sleek. Don't you think so? Look at the picture above. That was Ninja and Spyder eating together. Wouldn't you say Ninja is a big boy?

Don't get me wrong, it's not like Elizabeth is starving him. He has access to food all the time. But, it is diet food. Supposed to be good for him. But, he says it tasted like cardboard. I'm not so sure that is so bad. After all, our scratching box is made of cardboard and it has a delightful taste of catnip. But, I will respect Ninja's opinion as to the flavor of cardboard. Admittedly, I haven't much taste for it myself. I think Ninja just might be feeling a little left out, like he is being treated like a second class citizen. Spyder and I have room service, and he has to eat in the garage. Though, when I pass by his feeder, I can see he can eat as much as he wants. No small servings for him.

Elizabeth pulled herself out of bed, fed us and left for her book club. She is to lead the group today. I worry for her as she was up until 4 AM trying to finish that book. I don't think she did. How is she going to talk as though she had? She looks so tired. She locked Spyder, Ninja and I in the spare room before she left. She always does that when Esther is coming over. But, when Esther came over she opened the door to get the vacuum cleaner and Ninja took off running and she just went about her work. So Spyder ran to see what she was doing in the kitchen.

I went to the bed and laid on the lambswool sheepskin. I understand that it belonged to the once much loved Keli, and I can still catch a waft of her sweet fragrance when I roll over on it. Elizabeth has cut it into three pieces. Two smaller ones and one larger one. The two smaller ones can fit into the travel carriers, but right now one is in my bed and the other is on the spare bed for whoever wants to lie upon it. Funny how Ninja is not at all interested in it. Buy Spyder and I just love it. The big one on Elizabeth's bed, she put there just for us, and in the evening before she falls asleep Spyder and I claim a part of it. We both like to knead it a litte bit before settling in. 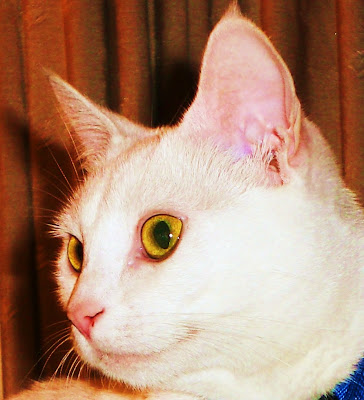 Elizabeth returned from her book group. She was limping and went to lie down. I know enough to leave her alone when she is like that. Her pain vibrates all over the place and it makes me restless. Ninja, with all his Zen training, prefers to lie down beside her. Ninja says he can pull the pain right out of her with his paws. I think it just makes her feel better because she's got that fat cat to pet. He purrs and loves to lie down upside down for her to rub his belly. I don't think rubbing belly is a Zen practice.

But, what do I know? I'm just a pretty white cat with thoughts of my own.

Posted by Elizabeth Munroz at 2:13 PM

You cats are so spoiled. BTW rubbing a cats belly is a zen practice!