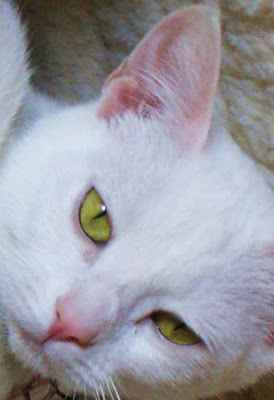 It is I, Bambi. How do you like my picture? Kind of sultry. Huh?

It's been pretty quiet today. There's no scent of Mr. Jeffery outside, nor inside. We haven't seen him since we all went in the car that day. We all had gone in the car, which made Ninja pretty nervous. It seems that Spyder doesn't mind the car at all. He was in his little cuddlesome soft side carrier, and fell asleep. I like riding in the car. I thought Jeffery did too. But, all of a sudden he was pretty upset. We all were worried about him because he was acting so strange, and then he got very quiet and Elizabeth gave out such stressed emanations. So she tooke to the vet and then we didn't see him anymore. Ninja and I have taken turns going to the screen doors and sniffing, but neither of us can get anything. He hasn't slept in any of his favorite spots. He's not under his tree.

We haven't heard him calling us either. Ninja usually goes to get Elizabeth to open the door for him. But, there has been no need, now. It is strange. This is the longest time he has been away from home. Perhaps he is still at the Vet? or maybe he has gone exploring. He has often told us of his old home where the forest animals and giant trees live. So, maybe he went there. I hope not, it sounds like a scary place to me. Mr. Jeffery said the last time he was there, a terrible fire ate all the trees, chased him and his forest friends away and scorched his fur.

Ninja has been coming into the room where we have our scratching house and sleeping with us instead of on top of the bookshelf above Elizabeth's bed. I guess he is a bit lonesome for Mr. Jeffery, and wants to be with us for company.

Little Spyder and I were playing today and he ran right over the bed leaping up the curtain. Then he walked across the top of it for a short bit. But, you know, he isn't very balanced and the next thing I knew, before I could give him a warning to get down, he fell right through the place where the curtains hook on to the rod. I was shocked. It happened very fast. I could do nothing but stare until Elizabeth ran and got him down.

It's odd that he didn't make so much as a peep, because later he told me that curtain hooks have claws and they clawed him all along one side. I was surprised to learn that. Lucky he has good fur. I have never climbed a curtain before, nor walked across a rod. But, I could tell that Spyder didn't make it up, by the look on his face when it happened. He's a stoic little guy.
Posted by Elizabeth Munroz at 11:24 PM

Milo and Alfie, and our mom said...