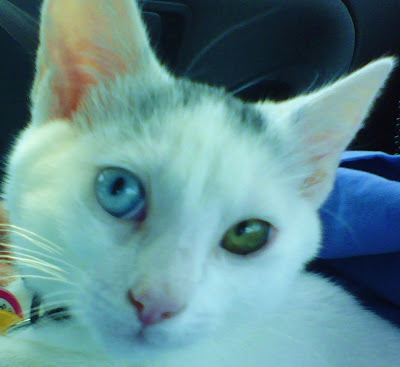 This is the story of Spyder, who I adopted the end of July. I haven't been able to focus enough to tell his story until now. As you know, I was so filled with grief about the death of Keli, I just wasn't functioning well.

I was visiting the Watsonville animal shelter to show pictures of Bambi to the woman who had fostered her, (Tara) when I passed by the newly accepted kittens cage. I really didn't have in mind to adopt another cat. I already had three others. I just like to look at all the newbies whenever I visit.

There he was among his siblings. They all ignored me except little Spyder, who rolled over and looked at me eye to eye. Then, he blinked at me. So, I blinked at him, and he blinked back. This was a very alert and conscious kitten in my opinion. And, he was beautiful and entirely unique. It was love at first sight.

I asked about him, but since he had just arrived, he was not available yet. He had to be seen by a vet, given his shots, and neutered before he would be placed for adoption. It was not even determined yet, if he would be offered at my local shelter or the one further away in Santa Cruz. Whenever I dropped in after that, I asked about him.

The shelter did not have any way that I could request him ahead of time or put a hold on him. I just had to take my chances and trust that if it was meant to be, he would come to live with me.

A couple weeks later, I dropped in just before closing, and there he was. Unfortunately, I would have to adopt him immediately, as there was no guarantee he would be there the next day, and I had to drive to Stanford then, to see the doctor. I had to make my decision at that moment! Fortunately, I just happened to have a kitty crate in my car at the time. I stressed about taking this new baby home with me, then abandoning him locked in the bathroom by himself for many hours the very next day, but there were no other options. I had to take him right then and there. And I was lucky they knew me as normally they would have shooed me out the door. As I mentioned before... it was closing time. (Note: I took him with me the next day.)

The shelter didn't have any special way I could adopt him at a lower price which they often can do. I'm a senior, and low income. Sometimes they have reduced adoption fees on kitties for seniors. So, I took the leap of faith and put the charges on my credit card. It would be a tight squeeze on my budget, $120, but it was meant to be!
Posted by Elizabeth Munroz at 1:28 PM