We Worry About It

Since Jeffery has no interest in blogging this evening and the other two boys are distraught, I thought I might fill you in on what has been occurring.

It was a flurry of nervous tension as things were being pulled out of cupboards and packed in boxes. Ninja got very depressed. He said this is what happened before he ended up in the Pacific Grove Shelter when his people got divorced. He keeps thinking that Elizabeth is going to take him to the shelter again.

I tried to reassure him, but I am in some doubts myself. I have seen boxes packed over and over in my almost two years of life, but I didn't end up in the shelter. I was fostered that last time. Before that, I just got moved from house to house as my person couldn't stay very long. She was going to school and could only live in a room. That was a problem. I go quite grouchy and the others who lived there didn't like that.

Then one of the other relatives kept me for a while, and then the boxes got packed again. That was when my kittens disappeared, too. I don't have any kittens anymore. But, I do have little Spyder in my life and I would like him to stay with me. He is a rambunctious play partner. He takes my breath away, sometimes. But, I will teach him some manners, yet.

Spyder is taking all this in his stride. He doesn't have any bad associations with boxes, so he is having fun exploring them and poking around in the open cupboards.

It wasn't until Esther came over that we learned what all the fuss is about.

Someone is coming here tomorrow to tear a whole in the kitchen floor and make a big mess fixing water pipes. Apparently, this will be very noisy all day long because of machines. I hear the washing machine and I don't like it, but have gotten used to it. I don't think any of us would be able to tolerate louder noises. Well, I suppose we would if we had to. But, I hope we don't have to.

Elizabeth brought home a pretty pink travel crate for me. I really like it. She put a piece of my favorite sheepskin inside and I went in and checked it out. Very cozy. She did the same for Spyder. Though he hasn't got a nice crate. He has something that looks like small luggage and can be carried on the shoulder. I think he will be quite crowded. But he's a good kid and will at least like cuddling up in his sheepskin, too. 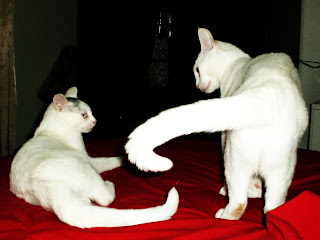 She also fixed up a crate for Ninja. He says it is the one he came home in from the shelter, when he was first adopted. It's really old and smells of the Keli Cat that is so revered around here. I can tell she was a grand old matriarch and worthy of respect. We feel her presence often when she comes to check in on Elizabeth. She sees how depressed Elizabeth gets because she is gone. Ninja got a message from her saying she was happy that we were here to help her. I wish she would give me messages, too. But Ninja says I'm too young yet, and besides I need to watch over Spyder. Well, that, I already know. But, I wonder how old I have to be in order to get messages.

There's a larger cage for Jeffery with his favorite blanket in it sitting in the living room by where he sleeps a lot.

Litter and spare box have been loaded in the trunk. I saw food being put into a carry bag, too. So I think she means business when she says she will have to take us all in the car with her and spend the day out of the house.

I hope it will not be as hot as expected as then she wont feel very good and that always makes Spyder sad because she wont play. If we are all going to be in our travel cages, I don't think we will be playing at all.

Maybe we can go to the pet store and hang around there.
Posted by Elizabeth Munroz at 3:03 AM

We are all wondering where you will be going. We hope it's not too dramatic a change for you. Having noisy work done at home is HORRIBLE so you are better off out of it.