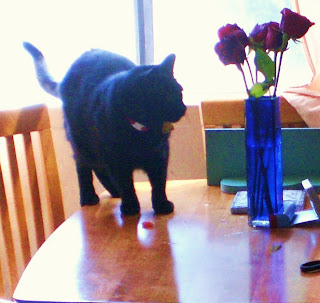 This morning while I was bird watching and Spyder was napping, the Monk and Miss E were having breakfast.

Ninja went to beg like an uncouth commoner! He has such bad manners, he even jumps up on the table! I would NEVER do such a thing! I stay away when they dine.

It would be unseemly for a queen to beg! Especially the way Ninja does it. Don't you agree?  Besides, I slept in between them last night right under the blankets! So, I don't need their attention the way Ninja does. 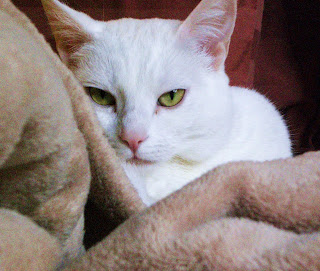 When the Monk woke up he was so surprised to see me right there by his elbow, he jumped. Of course, I found this quite disconcerting! So, I leaped like a little deer - like the Bambi deer I am named after, and I was gone in a flash.

The Monk called to me to return, and for once I decided to forgive him. So, I went back and he petted me. He's a good human, even if he already belongs to Ninja. 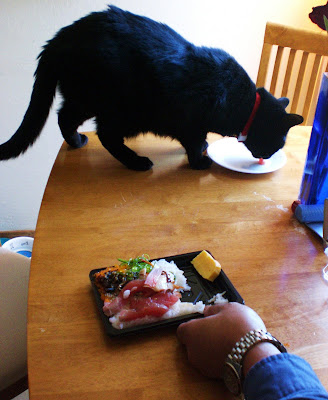 So, Ninja got to eat sushi again, even after they said they weren't going to give him any more, and this time his tummy was okay with it. I saw Miss E give him caviar, which I understand is fish eggs. But, he says he likes the hamachi best.

I love to watch the live fish in the aquarium and even taste their water when I get a chance, but I just cannot tolerate the idea of eating dead fish, no matter how delicious Ninja says it is!

Bird is so much better!
Posted by Elizabeth Munroz at 1:35 AM

Wow Sushi eating Ninja! He has gourmet taste!
I can understand why you wouldn't want to beg, that wouldn't be becoming of a Queen!

Mmmmmm ~ Mom loves Sushi!She said it is delicious. Ninja is one spoiled cat! And sweet little Spyder ~ I hope the monk didn't scare you too much.

Akshooly it was Bambi. I weren't in this posting. Keiko is ryte, Ninja is spoiled. I only eat on tops ov da frijerator