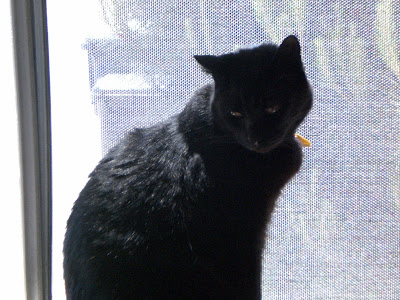 We sat in the patio window watching the wind blow on the last of the tarp over the "gazebo". They call it a gazebo, but we learned that it is really just a sun shade, like a partial tent.

But, it is fun watching the shreds of tarp blowing in the wind, no matter what it is called.  Ninja says it reminds him of the grass huts in Hawaii, but we are not sure he really has been to Hawaii. Though the shreds do look a little bit like long grasses, especially because they are green. The wind has been blowing on them ever since I came to live here in my forever home. 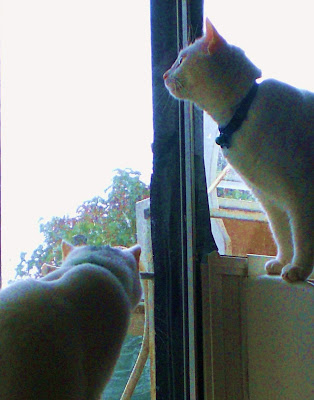 Then, we were rudely interrupted in our reverie by Miss E and the Monk, as they carried in a large box and dropped it in the middle of the floor. Ker-Plunk! They made a racket as the Monk removed long metal poles. Ninja said they looked suspiciously similar to the poles that hold up our gazebo.

Miss E plucked us all up and unceremoniously closed us into the bedroom. I didn't mind one bit. After all, it was much more peaceful in there as they hauled things out onto the patio. Spyder was quite excited about all the fuss, and jumped up onto the window sill to watch what they were doing. I soon joined him. But, Ninja would have none of it. He suggested we all "chill out" and lie on the bed while we had the chance to enjoy it. 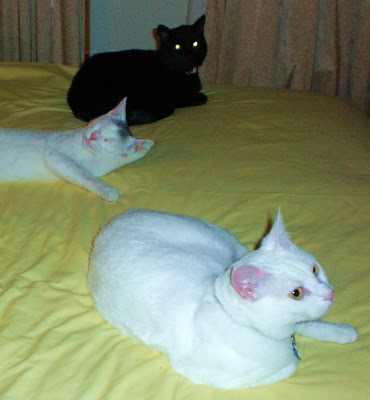 Spyder and I watched with consternation as we saw them dismantle our gazebo! We sadly realized we will never be able to watch the lovely green shreds swaying in the breezes ever again. It took a few minutes to figure out that the Monk was constructing a new gazebo. We were not happy as we shall miss one of our favorite pastimes. We soon became bored with this tedious process and followed Ninja's fine example and joined him on the bed. We made sure we left a lot of hair on the blanket to show our displeasure with the new gazebo!
Posted by Elizabeth Munroz at 12:07 AM