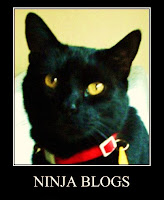 The Monk arrived with many grocery bags. Queen Bambi was in seventh heaven sticking her nose in them all. I mean, making inspections. Since I have the superior sniffer on me, I have no need for such investigations.

I knew what was in them. It is a shame that The Monk did not bring any sushi, for I sadly miss it, though it tends to upset my stomach. Such shame I must carry to be a ninja cat and I cannot tolerate my favorite food.

As you know, The Monk and I have a special bond. He has decided I am his own cat and lets me sleep on his legs. So after he left, I went to lie down on the same spot, just so I could feel close to him. 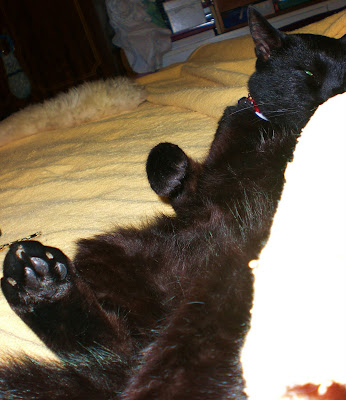 I wont say it was a mistake that I took a cat nap. Things tend to happen as they are meant to. That's a Zen Philosophy I strongly believe. Very sensible to not fuss about it. However, since I was not there when the sun went down to watch out the big sliding glass door I missed all the action.

I am sooo proud of my little buddy, Spyder. Queen Bambi reported to me exactly what happened. Since Miss E had left the big glass door open and only the big screen door closed, Spyder and Bambi enjoyed the breeze even after dark settled upon us. That was also the time the Ginger Cat returned to trespass! 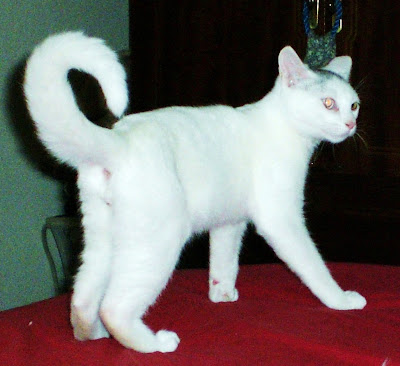 Queen Bambi was again sitting in a high place and could not get to the door fast enough to warn off the stranger. Before she could blink an eye, Spyder ran straight at him, the same way I did the other evening. Like me, he banged his head on the screen. Lucky for Spyder that the glass door was open. I really had a hard knock from doing that myself. I had not intended to give the little guy such a bad example. I hope he does not continue this unfortunate technique!

Spyder banging the screen and Ginger cat running away with his infamous whining is what made me wake from my doze, and of course, it was too late for me to do anything, so I turned myself around and got comfortable once more
Posted by Elizabeth Munroz at 2:35 AM

Wot? No sushi? Wot is he thinking of? MOL!