Floors Are Not Slippery All Day

A bug! A bug! How exciting! A flying bug! I just love the sport of bug hunting! We have had way too few bugs of late, with the weather being inclement.

Today, our dear Monk returned to do more repairs on the kitchen floor. Will that ever be finished? He keeps moving furniture around and Miss E has piled things everywhere. It's a mess, and not the neat environment fit for one of my station in life. As a Queen, It is very disrupting to say the least. I must admit this disturbs me. One can hardly maintain a regal bearing if one has to climb over objects that were not there yesterday. One's royal environment should be exactly as the one prefers, and I do not like all this upheaval! Miss E understood and put me in the bedroom by myself.

That being said, the wonderful benefit of all this was the Monk's comings and goings throughout the day. I could hear that front door open and close repeatedly. Since the weather was nice, I was already watching the bugs fly around from my high location in the bedroom window. Oh, the bugs! They are back! And they were getting into the house with all those in's and out's! 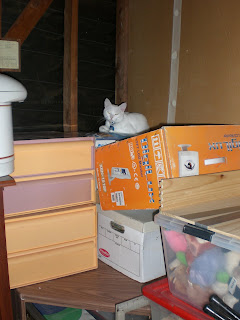 I knew the boys were enjoying watching the bugs out of the sliding glass door in the other room. They were closed in there together. A very good idea, I must say, since they are forced to get along nicely when they are confined like that.

One time Miss E came into the bedroom and I just zipped right out. I wanted to get into high gear bug hunting, and I was quickly scanning the ceilings when I realized I smelled something quite noxious. By the time I got to the kitchen I discovered exactly what it was. Very sticky, gooey gluey stuff was all over my paws in no time at all! I ran across the newly tiled floor right past the Monk as fast as I could, but the goo did not come off my dainty paws! Oh, no! Miss E was coming from the other direction. I knew she wanted to pick me up. But, how could I let her? Then she would get goo on herself from me. Besides, I really didn't want her to know I had made such a faux paw! So, I zipped on out through the kitty door into the garage and sought a place to hide. But by this time, I now had litter stuck to my paws. I just looked at Miss E and said, "help?"

She picked me up and unceremoniously wrapped me in a towel. I hate it when she does that. Where is my red velvet robe as befits me? I was very tolerant of her as she picked the goo and bits of litter and dust and hair that was stuck between my toes. She even cleaned off my claws very nicely just by picking at them. She was not about to use nail polish remover! Thank heavens for that. I'm sure I would have swooned from the fumes! By the time Miss E started on my back paws, I had lost my patience, though. Where's my dignity? I ask you! I told her several times, very nicely, to let me down before I managed to overpower her and removed myself from her presence. She is a clever lady. She knows not to chase me. I can count on that. So, when she called me very nicely, I returned. But, I still didn't want her picking at my back paws. 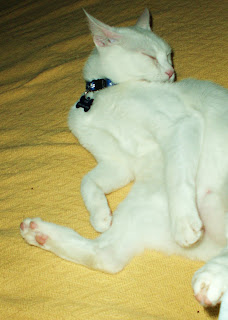 Miss E called the vet as she worried that my toes might get stuck together, wanted to know if she should take me in to the vet. I was appalled at the exorbitant price they suggested to her and told her, no, I would not go. She put me in the carrier anyway. I didn't argue with her. I was resigned to go. But, I had misunderstood. Apparently the vet had told her the substance was eco-friendly and to give me a tranquilizer. I forgot we had them for emergencies. Within a short time, I was much calmer, and I really felt quite safe and sound all cuddled in with my furry sheepskin to knead. Later, I wouldn't mind so much when Miss E picked at my toes to get the sticky stuff off.

Ninja and Spyder were out from their afternoon bachelor party and stalking about the house looking for the Monk. He hadn't said good bye to them and they were a bit put out. Probably a little jealous, I suppose. The Monk spent a great deal of time saying good bye to me when I was still recovering from the calming medicine, and I'm sure they heard him. I decided to tell the boys that the Monk sent them his love and had to hurry off because he had stayed almost til midnight putting in the tiles. So, they went off into the kitchen to investigate the quality. I told them to be careful for the sticky stuff. They assured me that none was visible anywhere. So, I didn't worry about them. I'm sure Ninja would handle the situation by doing his ninja flips. But, little Spyder, who is not so little anymore, would probably be quite perplexed.

Once the boys had done their safety check on the house, they found everything in much better shape, so they had a snack and climbed up on the bed to rest. Miss E lifted me out of the carrier and we had quite a good time cuddling while she tickled my back toes. It was very nice to get the rest of that sticky stuff off my paws. She also carefully trimmed some of the fur there, too. Although I could have done that myself. It was nice to receive the royal treatment and have my paws all pristine again.

I had just settled down in my boudoir when I noticed Spyder give the alert. BUG! BUG! BUG! And, there it was making a dive bomb for the lamp shade. I knew there were new bugs in the house! Spyder and I got to it at the same moment bumping that critter right between our noses. Sadly, it got away. Spyder was quite impudent. He said, "Why don't you watch where yer goin?" So, I snapped that bug right off his face and popped it in my mouth, much to his dismay. And then.... I let him know in no uncertain terms that he could not communicate with me in such a manner! 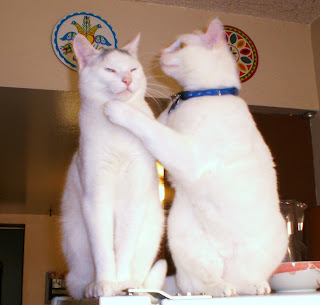 Posted by Elizabeth Munroz at 1:44 AM

I'm glad you got all the yucky goopies off your paws okay.

Exactly, my dear Daisy. What's a Queen to do, I ask you. We must keep our subjects in line! Especially since Ninja was elsewhere oogling over a pretty kitty he found online. I wonder who see can be?