Spyder and I took turns staring out the window looking for him and there was no sign. 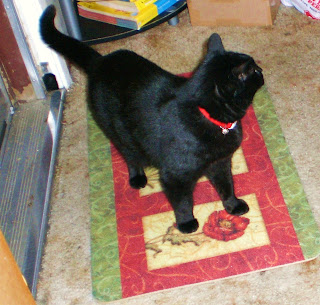 Ninja was waiting by the door for a long time and looking forward in anticipation in hopes the Monk would bring him some more sushi like he did the last two visits.

I told him they were special treats between the monk and him because they understood each others Qi energy as Ninja is always saying. 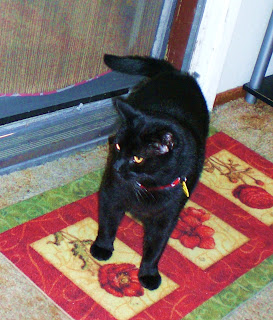 And because it is a treat, it doesn't mean it has to be brought every single time.
But, Ninja continued to pace patiently (anxiously?) waiting by the door.

Ninja kept asking Miss E why the Monk wasn't here, but she either didn't want to talk about it, or she was ignoring his requests for information. 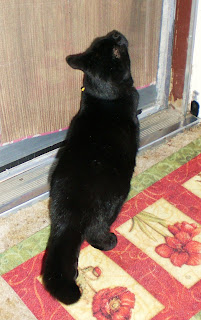 Perhaps she just didn't realize how much this meant to Ninja. She didn't seem worried that the Monk had not arrived, so we took that as a good sign.

When the Monk finally arrived at the Witching Hour, he was all very happy as he had gone to have a good time with his son. We didn't know he had a son, but that explains those times when we have sniffed him and he had a similar smell to himself on him, but not quite the same. A grown up smell, much like the Monk's. So, that explains it.

Ninja was very disappointed that the Monk had not 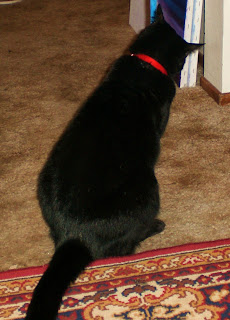 brought him sushi so they could have a good man to mancat meal together.

He wouldn't admit it, but I could tell, when he went to lie down and sulk and didn't even speak to the Monk after he didn't smell the sushi.

This seemed all very odd to me, as the Monk should have been able to bring some fish home with him.

We learned that he and his son went to a Sharks game! Now we are totally mystified. It seems if they were spending the evening with sharks they could have at least brought home some sharks fin, a wonderful delicacy that Ninja enjoys very much. 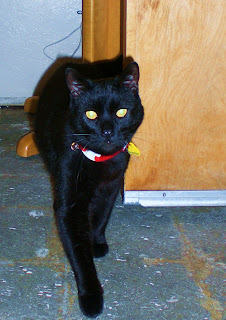 He says there is something called Shark's Fin soup and it is wonderful. I think I would rather remain with a more gourmet diet, such as Miss E already provides for us. Plus, whenever I can, I will eat some of Spyder's baby food. He hardly seems a baby anymore. He is seven months old now and very big for his age. I don't now why he needs extra nutrition and calories? But, it is delicious, I must say. The extra calories, especially.

Since the Monk came in so late, it was time to go to bed, so we all snuggled down and dreamed of Ninja getting his sushi so that he could be happy. And if Ninja is happy we are all happy.
Posted by Elizabeth Munroz at 4:11 AM

Poor Ninja ~ no sushi! We've never tatsed sushi but are guessing it is nice!