As any respectable ninja, I take care of my body. I practice meditation, yoga and Aikido. That is... I used to! When I lived in Pacific Grove with my dog Sensei Master 's they gave me plenty of aerobic exercise to do. (Mostly they chased me.) I was a finely honed specimen of feline sinew and muscle, as I am sure you can tell by looking at my photo. I was in prime condition. RIght? 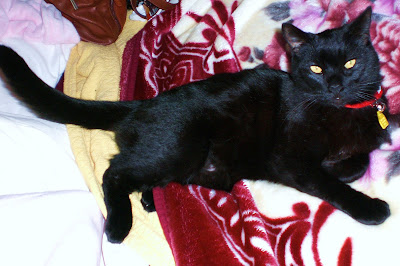 But, things changed! When I first arrived, there was only Jeffery. He was quite an elderly gentleman cat, a forester, and had incredible tales of life in the wild. Certainly believable by the state of his missing teeth and scrawny appearance. Though not a martial artist like myself, he could throw a resounding sneaky punch that left me airless! Being a gentlemancat, I did not retaliate.

I understood right away when introduced to Jeffery that he was depressed and had not been eating. No wonder he was so skinny!  So when I came along, suddenly Jeffery's appetite was back. There's nothing like a good competition between mancats, you know! Mama-san was feeding him a lot of food, as much as he could eat, so he would gain weight. And naturally, without my dog Sensei Master's to discipline me in my ninja exercise program, I became lazy, I mean... more meditative, that is.  Since Jeffery was generous, I ate freely at his bowl, and have admittedly the sinew has become saggy, the muscles have become muffled, the finely honed has become hunky-chunky. Well, again, I'm sure you can tell just by looking at my photo. 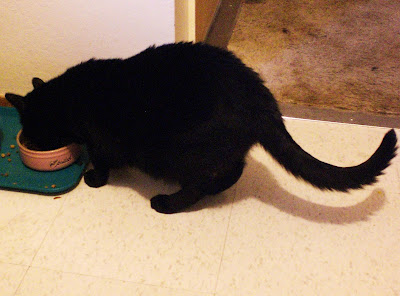 So today, in front of the whole world, this most humble Ninja will do the most inscrutable correct thing. I have now made my New Year Resolution to shape up!
Posted by Elizabeth Munroz at 2:37 AM

We wish you good luck with your resolution. Happy (and slender) New Year Ninja!!!

Are yoo joining the online diet club? (the one our moms are in!)

Happy New Year to yoo all!

Ninja, to be honest, in picture 2, we see it as more of you to love!

Still, for health reasons, we say YAY to your new year reso!

Yes! Yes! More of me to love! And I deserve love for all the protecting my Queen and kin. Right? I think I shall go over and nudge the kitten away from her bowl and get me some more love!