One Eye Jack and the Rat Terrier 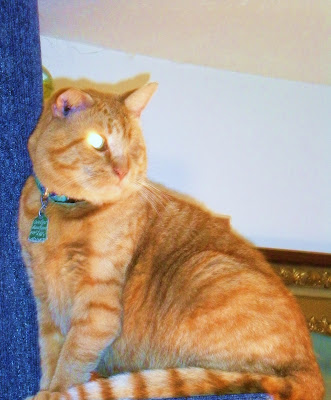 One Eye Jack dropped by again. It's great to hang out with him. I didn't realize before that he actually has a forever home. He spends so much time wandering the neighborhood, I thought he was a free agent.

That being said, he has a tough guy collar and an ID tag just like the rest of us.

So, when I asked him about his purrsons, he said they were two "Dudes" room-mating, and sometimes there's a "chick" there. I'm not sure what he means. I don't understand street talk, but I'm sure I will learn.

Jack tells me he has a cat door that swings open to the outside. He can come and go as he pleases. He says sometimes the raccoons come in through his door and eat his food. But he doesn't mind. I don't think I would like the invasion of my space and I would need to protect Queen Bambi and Spyder from such intrusion.

He seems to be a very avant garde, cool cat. He's as curious about my martial arts training and meditation skills as I am interested in his street fighting techniques. I'm sure we will learn a lot from each other. I hope he will sit down sometime and tell me about how he injured his eye. 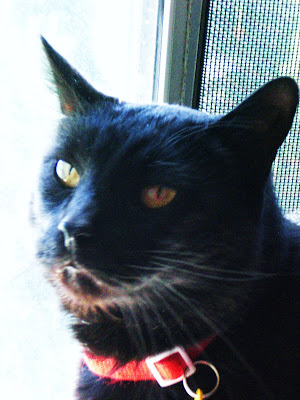 Yesterday, I watched him from my favorite window as he participated in  the neighbors yard sale. He was sniffing things out when a Rat Terrier dog trotted right into the middle things as if he owned the place.

Jack politely gave him a warning growl and raised his hackles and told him to get along. But Rat, just flipped his head at him in an insulting manner.

I like dogs well as anyone. But, what honorable cat would take such behavior from a disrespectful dog? I watched in admiration as Jack took after the Rat and chased him right down the middle of the street! Jack definitely has good control of his Qi energy!

I guess we wont be hearing from that one anymore!
Posted by Elizabeth Munroz at 12:05 AM

My very first cat was an indoor cat. Every time she saw a dog go by the house she would hunker down and make that funny sound hunting cats make. One day she saw a collie walk by the house on the sidewalk, and before I knew it, she hit the unhooked screen door and shot after that poor dog and attacked it! She then chased the poor dog down the street! I had no idea she really had such a deep seated prejudice. I have no idea where it came from, I had her since she was very tiny, and never had any dog encounters til then.