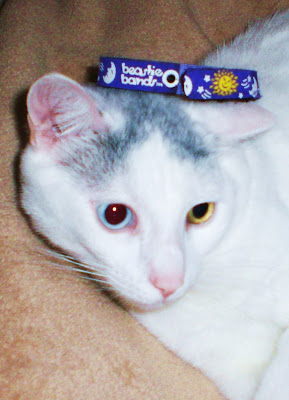 Oh, I was so furrstrated with Miss E. Her gave me a new collar for my Adopta-birthday. Tho it were very purrty, all purrple with suns and stars on it, I just don't lyke collars on my neck!!! I just don't know how to get that poynt across to her!

I politely sniffed the new collar. It smell good enuff. That Ok. I seed how purrty it was. But, when she starts ta put it on me, I back up. Only thing is, she was already behind me! So, I couldn't back up fur enuff without landing on her lap. So I gots stuck there, and she put dat collar right around my neck. By dat tyme I already upside down and slapping her wiff my tail in da face, but she still persisss, and latch da collar shut.

I pretend effurrything is cool and walk away. But all night long I scratch at dat collar and it jes go round and round my neck and nowhere it stop.

I spent dis morning trying ta back out of it, rolling my neck against things and turning over and over, but dat not work. This one of those trick collars... ain't no beginning, aint no end.

Bambi tell me I a bad boy. She say I needs the collar so Miss E can put tag with my name on it. I tell her mind her own buzniss, I already knows my name! Den she say she throw up her paws. She say, now I a teenager she don't know whats ta do wiff me. Well, I don'ts know what ta do wiff her either. So there! We even!

Ninja say, make calm, make relax and accept collar as a natrul part of me. He say he have many collars in all martial arts, but they is called belts. I just look at him hard in the eyes until he look away. So much for Ninja! 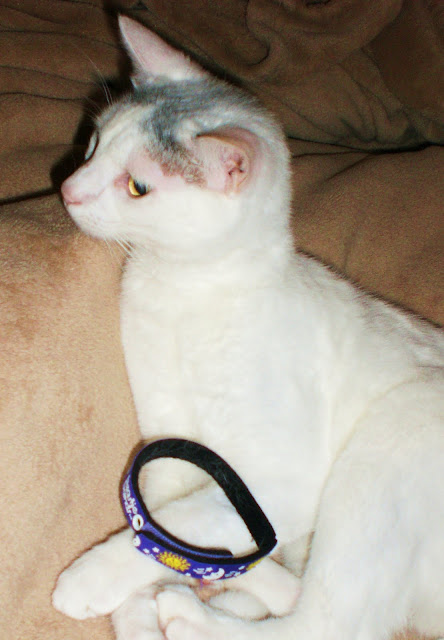 Queen Bambi, she don't unnerstands me. Ol' Ninja think he knows efurrything! Them guys just don'ts com pre hen me. Nobody unnerstand me. Just cos I is teenager cat dont means I gotta do efurrything efurrybody say. I is meown grown up kitty and I can do what I wants. So there! And I don't wants ta wear no new purrty purrple collar wiff sun n starss running on it! Not yestidday! Not taday! Not efurr!

This morning I hided under the bed and I stick my jaw unnerneath the collar. It a streachy collar so I got it ta streach right up over my teefs and I begin chewing. And so I chew and chew and chew on it a long time and start cutting dat collar in half. It taken a long time, I tellya! By the tyme I half way thru chewing da collar in half, I already back up out of the bedroom and out inta da hallway and backed into the linen cabinet, and I is still chewing! I mus admit my teefs and my jaw getting awful tired.

Then, Miss E, she find me, and her make those baby cry noises at me and I so glad she pick me up and slide dat collar right off me like a blinky eye. (How she do dat so fast?) And I so tired all I wanna do is have her hold me. And dat what she do. Hold me. Maybe now she believe me when I tell her no more cat collars!
Posted by Elizabeth Munroz at 8:02 PM

Very sweet. We have a cat like that too, but she adjusted. Once it's on she's fine, but when you go to put it on her she let's out a loud yowl. I assume he has a chip? That should do.

Oh no. How awful. We fink if yoo don't want to wear a collar yoo shouldn't! Have yoo gotted a micro-chip? It's best to have sumfin to link yoo back home if yoo get losted, isn't it?

Yes, I has a chip somewhere. I lick myself all over but neffurr can find it, tho'. I fink Miss E gots it finally figured out dat I ain't gonna wear no collar. >^..^<

Hi there! It's nice to meet all of you! We wear Beastie Bands and at first we hated our collars!! But over time, we learned to accept them...Ernie still tries to scratch his off and sometimes he's successful...

"It's cool about the earring. I saw an old pirate movie when I was a kid, and the cat had and earring, I thought that was so cool. In reality, if Spyder didn't like the collar, imagine what he would do with an earring!

I was thinking about our last cat that liked his collar, but had never had a bell on it, the cat we own now doesn't mind it. When we put a new collar on him it took us a while to realize he was running himself ragged trying to get away from that bell! I bet he thought the other cat was getting even for all the torment he put her through! Once we took off the bell, he was fine."

and they say cats aren't smart ;-)

I like the style and convenience of Beastie Band collars, however, since Spyder meticulously spend all that time chewing a straight cut through his, I wont buy him another one.