We have a friend who lives in Florida. His name is John Rahn and he loves kittehs as much as Miss E does. He is our guest author today. We don't have any pictures of the kitteh in his story to share, but we have some of his present kittehs. 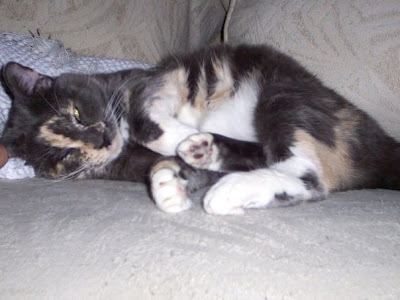 A neighbor's cat had a litter of kittens and there was one that was just amazingly beautiful. A 6-toed kitten with chocolate-point markings with very white toes and a distinctive, cat burglar-like mask across his nose and eyes. For weeks I kept teasing them about stealing that kitten.

As it turned out, they were moving and one day knocked on my door to tell me that they HAD to leave now, they couldn't find the kitten, and that if I find him, he's mine and to take good care of him. He had become an 'outside' cat.

Soon after they left he came walking up to my porch, looking for food, so I snatched him up and carried him into the house. With those markings, I immediately named him 'Bandit'.

I put him down on the floor and he, being so used to enjoying the outdoors for so long, FREAKED OUT in my house. He was literally climbing the walls, trying to get out. I chased him around trying to calm him down, trying to catch him, but he was VERY fast. 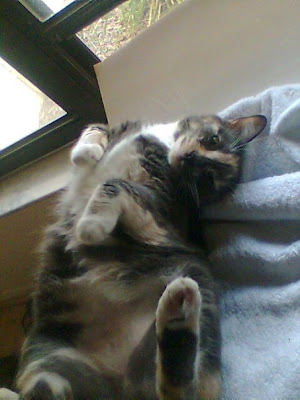 I decided to leave him alone and let him do what he had to do and went into the kitchen to wash some dishes. As I was standing there, I could hear him in the living room, running around and scratching on the walls from jumping, still freaking out.

Then all of a sudden it was quiet - except for the low, long, guttural "mmmrrrooowww" sounds of what sounded to me like 'a cat in trouble.'

I quickly dried off my hands and went in to the living room. There was Bandit, hanging upside-down from his hip bones, in the loop of the pull-chord for the vertical blinds.

I laughed a bit (I couldn't help it) and carefully eased him out of his upside-down noose.

From that moment on I was his buddy.
Posted by Elizabeth Munroz at 12:11 AM