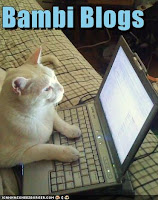 We have respectfully avoided jumping up on the rocking chair all the time we have lived here. Even Jeffery never sat on it.

Something different about it makes it special and mysterious. Lately, Spyder began sitting under it a lot.

When we wake up from our naps, there he is. We've asked him why he sits there. He says he's talking to his friend. 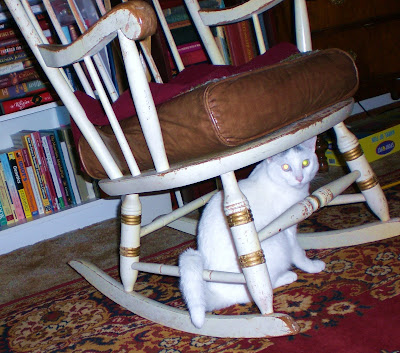 We thought he meant his friend, Humphree, the dog who was lost. We thought he was pretending Humphree was here with us. But, no, he insists it is not.

Apparently, some invisible cat rests upon the rocker whispering secrets to Spyder. This all started last month, and we didn't pay much attention to it. But, it's continued and now we are wondering more and more what's going on?

Ninja tells me there are many stories of ghosts his teachers told him. When he was little he enjoyed the ghost stories, but as he grew up he realized it was part of his teachings.

This is all quite mysterious to me. How can there be something I don't understand? I have to admit we have previously seen something out of the corners of our eyes as I have mentioned before.

Lately, I have heard unfamiliar purring. Perhaps that is the whispering Spyder claims he hears from the lady cat who took care of him when he first came to live with us. 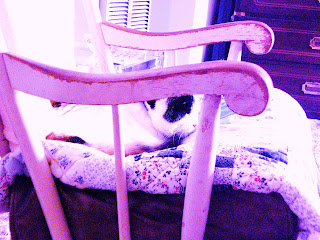 We've never seen her. But, he insists.

What are we going to do with this precocious young boy cat?

Perhaps it is more than his imagination.
Posted by Elizabeth Munroz at 3:52 AM