I had told Xavier that I would deliver Keli's poster to him. Even though it is a very long drive between here and San Francisco I was determined. But, today he called to tell me that his friend, Ian could bring it up to him. All I had to do was drive to Ian's house and give it to him.

I realized that Xavier and his friends would all be traveling together to Big Rock. He mentioned before that he had rented a truck to transport everything, all their tents, camping gear and supplies to sustain them in the desert for a week. He mentioned that the Playa had a very alkaline soil, that there were dust storms.

All I could think about was, where would Keli's memorial poster fit into the scheme of things? It would be too delicate if tucked up against some picnic chests or folding tables and chairs. What if, in traveling, the load shifted, and Keli's poster were to get all scraped up and smooshed against the wall of a truck? What could I do to protect it? I would be going too far to wrap it in a special box. But, a non-descript plastic or paper bag would allow it to be visually lost among everything else. I know my son is responsible, but in the midst of unpacking and setting up their camp as a group, it is possible the poster might be set aside, forgotten, and just not found when looked for. 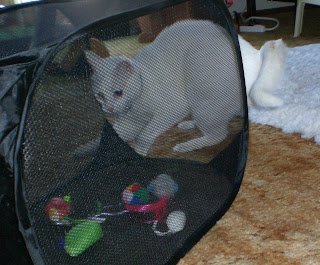 Silly of me to worry. Deep inside I know it will all work out perfectly. Just the same I decided to take Bambi's mesh "tent" and turn it into a poster holder. It was perfect. Originally designed to carry laundry, it was a wonderful tent for Bambi to play in. She often played so rough with it that she flattened it. The perfect shape to put the poster in. And now, it will bring attention to it by it's unusual appearance and not misplaced.

I drove to Ian's house. He held the poster for me while I took pictures of it, and then took it into his house as we said good bye.

And so, dear Keli's poster, thus begins your journey. I hope her spirit will watch over you and benefit from her experience of going to meet her boy, Xavier, grown now to a man, who held her body in his arms, and cried when we put her in the ground. I hope that this will help appease some of those demons of depression that demoralize me.

I remember what a remarkable place the Temple was for Xavier last year. I remember how he told me about the way a hushed reverence embraced the place. I remember he told me of all the names tucked into the wall, all the prayers, all the comments made to loved ones lost to death by the many thousands who attended Burning Man. I remember him telling me at the end of the Burning Man experience, the Temple is lit on fire, to burn to the ground. Ashes to Ashes.... Playa dust to dust. And I think... what more perfect way to get rid of those demons but to burn them in the effigy of my most beautiful Keli.

And so today, Keli Memorial begin's her journey up to San Francisco and subsequently, on Saturday, She will arrive at Burning Man. She is ready. I am ready for her to go to be placed in the temple with all those others who are remembered and loved. And then all her pictures, (the creation and representation of her earthly life and spirit life) will be immolated,
will go up into smoke,
high in the star filled sky.
Will the ash of her poster reach the heavens?

Maybe. But she is still here with me. Perhaps it is my terrible grief that will be freed in the fire?

I hope that I can heal from this grief in a healthier way, and I feel like, maybe, this is the beginning.
Posted by Elizabeth Munroz at 11:12 PM