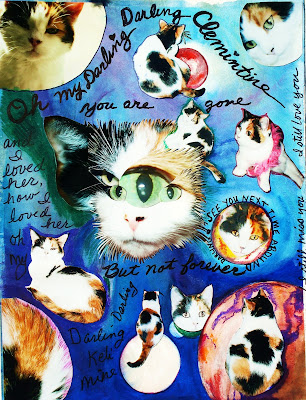 This was started as a memorial card and quickly grew into a poster. I had a small notebook beside me while I worked and as I aligned the pictures thoughts and memories would come to me and I jotted them down in the notebook.

I was going to paste the notes underneath the pictures, but realized that my thoughts needed to stay with me.

The pictures could go off to Burning Man and be burned in the Playa Temple. It made me think of cremation of the body, which I hadn't had done for Keli. Wish I had, as there is something disturbing knowing she is rotting four feet beneath the soil right now. If there ever is a next time, I will go the extra expense of cremation. If I suddenly won the lottery. I think I would have her dug up and cremated.

This memorial card turned into a poster. I had started a water color painting a few years ago. A painting of a universe of sorts with planets and a nebulous cloud resembling the eyes of the buddha. But, I never finished it. Waiting all these years there it was begging me to be used for Keli. I took her pictures, and cut them all into individual Keli's to be placed on the planets, to float in space. To be the center of the universe with her third eye chakra wide open in wisdom and compassion. To represent that being who occupied the earthly body. To represent Keli's higher spirit that which is beyond this plane of existence. Her intuition, her gifts of healing, her power to influence the mind.

I worked feverishly on this. I felt unwell physically throughout all this, but felt compelled to complete it.
Posted by Elizabeth Munroz at 11:36 PM