I hesitate to report that there is an INTERLOPER in the house!!! 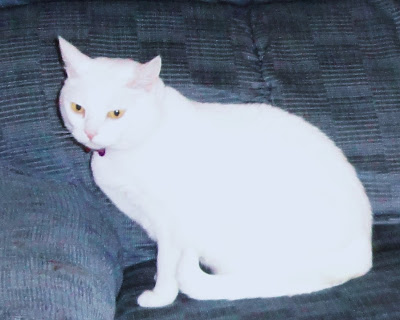 Mom thought we wouldn't notice? That's what she thinks! Well, I'm no dumbie! I know what I sniff and it's a cat! Another cat!

Darn it Mom! Aren't we enough for you? Do you have to rescue every poor pitiful kitty that you stumble across?

Yes, yes. I can tell by the smell, she's a Queen cat, too! Thank heavens Mom didn't bring her kittens along with her!That would have been more than this Queen could bear!

She also has that strange medical smell that I once had on my soft underside. That was when I "got fixed"! My tummy was sore for a while there. And I suppose that's how it is for the new Queen. Obviously, she needs to recover. She doesn't need to be surrounded by the four of us right now. Poor thing!

I presume she's our new family member, and not just a visitor. Mom is pretty picky about who she lets into my home. She knows I wouldn't tolerate a parade of strange animals. 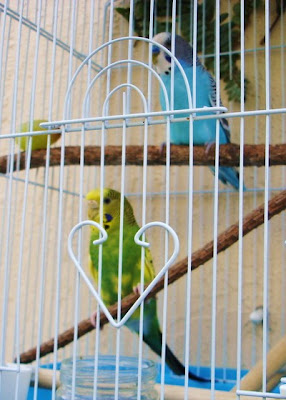 Well, except for the birdies she once brought home. But, of course, they were only temporarily visiting until the neighbor came over and got them.

My goodness but they were messy! They scattered bird seed everywhere. At least the outside birds we feed at the feeders clean up after themselves. Our visiting birdies were pretty, though. I have to admit it. But, they didn't sing out in our favorite high pitched songs.

So, even though they were interesting, we were not curious enough to have them come out of their cage and play. Mom had been a bit nervous about that. But, she had nothing to worry about.

The fish, on the other hand... we LOVE the fish! They are so fascinating! Mom calls them Angels. They don't have any wings. And certainly, they do not fly as angels might. Nonetheless they are beautiful to behold! Shiny silver so mesmerizing with black velvet striped patterns. Mother Nature has blessed us with such creatures!

As for the new Queen. I'm not so sure she will be a blessing. I haven't seen her. Haven't been that interested in getting acquainted. Haven't even bothered to introduce myself through the closed door. . 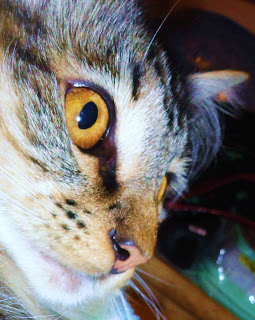 Shadow says she growled at him when he took a peek at her. Mom was entering the room to give her food and attention, when Shadow approached the open door. The new Queen took one look at him and went into Mother Tiger mode. She can't help it, you know. She still has mommy hormones in her. I'm sure of it. As I did, too. It made me protective even after my kits were gone on to their new forever homes.

Shadow has no manners! Well, what can one expect?He's only 8 months old. I haven't yet had the opportunity to take him under my tutelage. Once she feels more comfortable here I will greet her properly... one Queen to another

I've heard her purring when Mom goes in and sweet talks to her. She's a mystery to me. Shadow says he didn't get a good look at her, but he thinks she could be related to Buffy da Bampire Flayer. I wonder what the new Queen will be named.
Posted by Elizabeth Munroz at 3:05 AM

We are looking forward to being introduced to the new Queen. We are sure you two will get along fabulously and have lots in common.

Thank you Fenris! I hope she likes us!