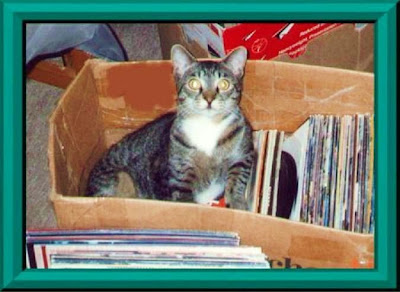 That's Gabe's picture before he got the cancer. Isn't he an intelligent looking fellow?

There was no chemo or radiation that could help Gabe. So, his foreleg had to be amputated. But, you know what? That took care of the cancer. It never came back. 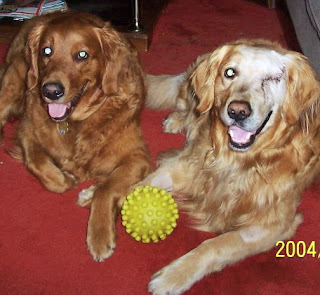 Unfortunately, that is not always the outcome for every cat with cancer, I'm sure you know.

Miss E also knew some dogs with the Chondrosarcoma. They didn't do so well.

There was Shoob, a well loved Golden Retriever from Pennsylvania. Shoob loved to go geocaching right up until the week before he left. That's Shoob in the picture with his girlfriend, Sheeb. Shoob had Chondrosarcoma in the skull right under his eye and it had to be removed. He went to the best Vets at Cornell University, too. But they couldn't save him. Wouldn't it be nice if we could kill cancer instead of cancer killing us? 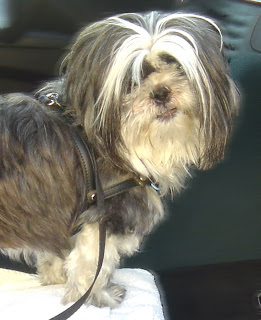 Then there was Ling-Ling a four year old Shi Tzu.

Ninja says one of his Spiritual Training Masters was a Shi Tzu. He is sad to know that Ling Ling had to leave this world in the prime of her doggie life.

She had Chondrosarcoma in her head like Shoob, but hers did not affect her eye. Ling Ling was not able to have surgery and had to be Euthanized. At least Ling Ling's purrson was there to hold her as she went to sleep. I'm sure that comforted them both. I'm glad Ling Ling did not have to suffer needlessly.

There is something good to say about euthanasia, isn't there?

We are joining our friends Milo and Alfie who live in England, in the event held on October 2 by the LIVESTRONG Foundation. We are going to wear yellow to bring awareness. Ninja already wears yellow on his collar tag. Plus he an I both have amber eyes. That counts as yellow, of course. Spyder only has one yellow eye. The other is blue. But, I'm sure Miss E will help us all have lots of yellow to help the LIVESTRONG event.

Check it out and decide what you would like to do.
Posted by Elizabeth Munroz at 10:29 PM

What a wonderful post Elizabeth ~ Milo and Alfie would like to link to it from their blog on Monday next.
I remember Shoob and it's nice to see a pic of him again today. I never knew about Gabe ~ what a strange cooncidence that he had chondrosarcoma (with it being so rare). Did you know he had it when you took him on? And poor little Ling-Ling, what a pity.
It would be wonderful if we could kill cancer ~ after all, it has killed so many of us already.

Of course, link us! Gabe wasn't my kitty. He was one of the first members of the Chondrosarcoma Support Group. BTW, Queen Bambi wrote the post and is a little miffed about the "error" ;-)

Our furiends Milo and Alfie told us about this post. It's so heartbreaking to hear about stories of both people and pets taken from us too soon because of cancer. We hope a cure is found one day soon.

This was a wonderful post. We came over from Milo and Alfie's and we sure are glad we did. Our Mom has cancer too. At the moment she is all right but it is a horrible disease. We are getting our yellow all ready for the big LIVESTRONG day. Glad to meet you
Have a great day.

Hi Elizabeth, we came over from Milo and Alfie's blog to read your post. Cancer is horrible and has touched too many of our lives. We're going yellow on Oct 2nd too!