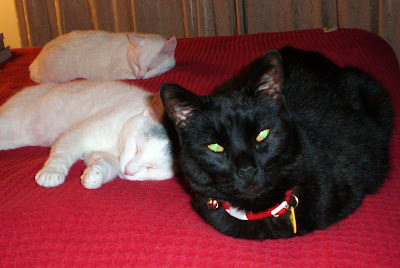 We saw on the TV where a lost dog was found. Of course, dogs get found every day. But, this was a bit different.

In Sacramento almost 3 years ago there was a terrific winter storm. The winds were so strong it blew down fences. With the fences blown down some doggies escaped.

Bambi says she wishes they had not been left outside in the storm in the first place. But, I have reminded her that maybe their purrsons were not at home before the storm started. And we shouldn't judge.

One of the doggies was found right after the storm. But sadly, the other one had disappeared. It is a good thing the lost dog had a microchip because he was found in a shelter today a long way from home. The doggie's microchip was up to date. The doggie's purrsons, address and phone number were still accurate. And so they are all now re-united! 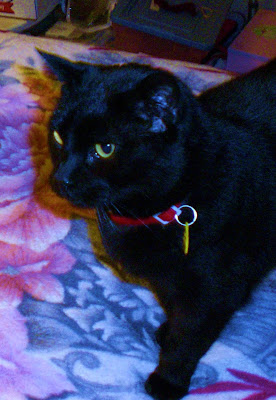 Nobody but the doggie knows where he has been all this time, or how he got so far away from home. Maybe he's a ninja like me and had a secret job to do and this is his cover story. Maybe the storm picked him up and has been carrying him around on a cloud so he could travel the world. Wouldn't that be cool?

Now Miss E is digging through her papers looking for our microchip files to be sure everything is up to date. Since we are inside cats, I don't think she has to worry too much, but if there is a bad storm and a window were to be broken, or if there is a bad earthquake, we might escape and be lost, just like that doggie. So, I am so glad we are all microchipped!

You can see the video here.
Posted by Elizabeth Munroz at 10:33 PM

Microchipped, photographed and blogged and sent throughout the world, they would always be found again :-)))

That's a very good point! Hadn't thot of that!

What a heartwarming story. It is always tragic when much loved pets go missing.

so true - micro chipping and in my case, collars too and MY ever watchful eye. Love Helen, Darcy and Bingley xx

I had thought a collar was enough and thought my dog would find his way home but he is gone and not returned and all the flyers I put up have not helped. You are so right that we need to be responsible "purrsons".

I really enjoyed this post. What a sweet story.

Thank you Banana and Cheese! Stay tuned and I shall post more news regarding the beloved pets of all purrsons.