It was a three cat night...
By guest Author, John Rahn 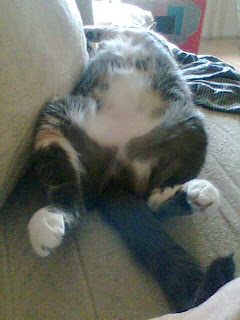 Living in South Florida it doesn't get really cold that often.  But recently we had a couple of very cold nights.

I pretty much refuse to turn on the heat (aaarrgghh I really hate furnace air) as it doesn't get that cold in this house unless the wind is blowing pretty good outta the north.

I went to bed this night after several hours of working at the computer. 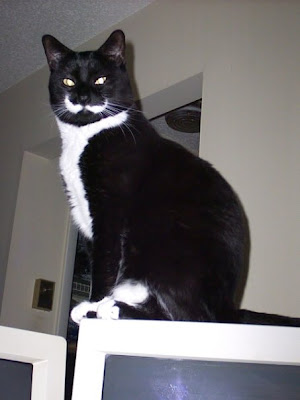 Cosmo was snoozing happily in his spot atop the big monitor, where it was nice and warm. My Dusty cat was curled up in the comforter folded up on the couch, and Oreo, being the child of the pride, was just plain working off young energy (or working up heat energy) running back and forth through the house, 'chirping' like crazy.
I turned the monitors off, got up from the desk and slid in behind Dusty on the couch (she refused to move an inch).

I carefully eased the comforter from underneath her and covered us both up.  She snuggled in against me, purring very happily. I pulled the comforter up to my chin and drifted off to sleep, just Dusty and I on the couch. 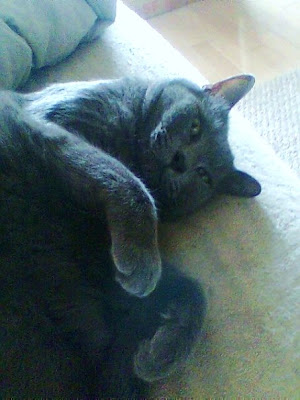 At five o'clock I woke up to the alarm, and it was by then quite chilly in the house. Trying to sit up to hit the snooze button, I discovered that all three cats were not just on the couch WITH me, but they were all on the couch ON me, and not very happy that I had to move from underneath them.

Think this means I need to turn on the heat?