Kitty Door to the World

What's behind door number one? That's what we've been wondering for quite some time now. It's mysterious bamboo covering, it's hidden fragrances faintly seeping through. This was our only nose connection to the outside world in front of the house. Of course, we have sensitive noses and smell things so much better than our human slaves companions, but when you have to filter everything through a securely fashioned bamboo screen, it is less than ideal. 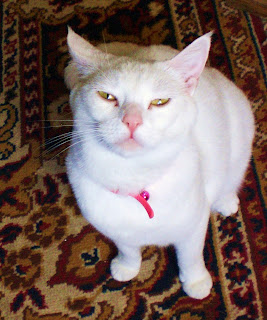 We have demonstrated repeatedly, our displeasure at having this barrier between us and the real world. As you can see by the picture, I have been so disgruntled about it.

No queen should be put through this kind of deprivation. Ninja and I, in particular have done everything we could to get through to those numbskulls, er... not so psychic humans to ameliorate the problem. Spyder hasn't quite figured it all out yet, though we have attempted to describe to him what he is missing.

So, imagine our relief when The Monk and Miss E tore the bamboo screen off the front door! Of course, it is still not quite perfect. Since Ninja cut all those gigantic holes in the window screens a few months back, The Monk replaced the front door screen with "cat proof" screening. I have to admit is appears to be tough stuff based upon Ninja's not having any more interest in ripping them open. 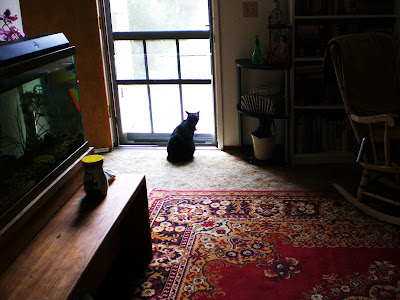 However, after replacing the screening, The Monk also placed Plexiglas on the bottom half of our side. Foolishness if you ask me. If we really wanted to cut the screen we would just jump above the Plexiglas and have at it. But, we are civilized cats, after all. So, we respect the Plexiglas barrier, which is not glass at all. It is not at all like the aquarium glass, but more like the big jug that holds our special drinking water that doesn't come out of the faucet.

What dumbfounded us about the precautions being taken at the time was the quadruple thickness of the bamboo screen placed on the outside of the door. Ninja tried many times to get a claw into it with little success. 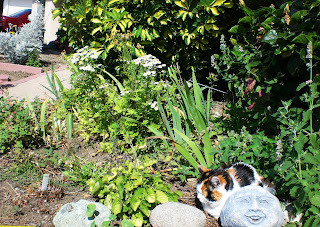 But after these months passing, it was enough that The Monk and Miss E decided it looked shabby. They took it down and it has made an exciting difference in our lives. Silly Spyder, he says the Dowager Queen sits out there in the sunshine by the door. I could smell no other cat. Besides, I am queen around here! We are delighted to see all the beauty outside our own front door that has been hidden from us.

I was so thrilled about it all! I was like a kitten on discovery! Once I could gather up all the front door outside smells, I ran from window to window to verify in which direction the smells derived. Ninja was ecstatic just to look out the front door. It has opened a new vista for us all.

Hopefully, now, with the weather less cold, Miss E will leave the front door open for us for longer periods of time. We have so much to teach Spyder of what all these new things mean.
Posted by Elizabeth Munroz at 1:55 AM

WOW! There's nuffin as good as sniffin' the fresh air and feeling the breeze on yoor furs. Yoor gonna really enjoy that change to the door.