History of Beau, one of my old room mates 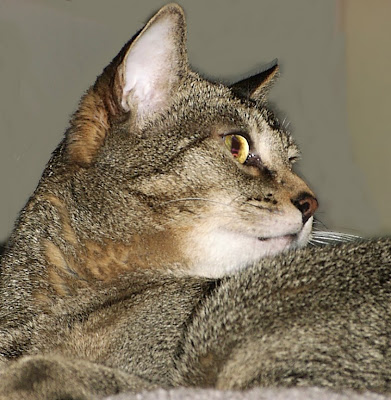 An elderly couple named Gen and Jim (my person's parent's) were missing having a kitty since their beloved "Happy Cat" passed away at the age of 24. They swore they would never get another as it would break their hearts, but they couldn't live up to it. So, one day Jim answered an ad in the paper. The ad said the seven year old cat needed a man to bond with. The owner brought his cat over for Jim and Gen to see. The kitty took one look at Jim and it was love at first sight.

Fred told them the kitty was named Beau, and inherited his aristocratic bearing from a long line of pedigreed Abbysinians. Fred had picked him out from the litter the day he was born. As it turned out Beau, was not considered to be "show" quality. His markings were not perfect and being knock kneed was not considered acceptable. Just the same, Beau grew up loved and spoiled by the young man. One day a lady came into their lives and Beau learned to like her, but really, he was a one man cat. Then, the lady kept being sick and didn't know why until the doctors told her she was allergic to cats. That was when Beau came to live with Jim and Gen.

Jim was delighted that Beau grew attached to him, and they became very good buddies. Gen and Jim nicknamed him Inspector.
Posted by Elizabeth Munroz at 11:16 AM