(Continued from part 2)
That night Magic slept with Gypsy on the pillow by my head. He was even more lovable than Gypsy and they adored each other. Magic was sleek and long, and tall.  He was the Abe Lincoln of cats!  When he stretched himself out, he could reach the top of the kitchen counter and watch me chop onions on my cutting board.  He was the sweetest cat there ever was!  I think we got a good trade. 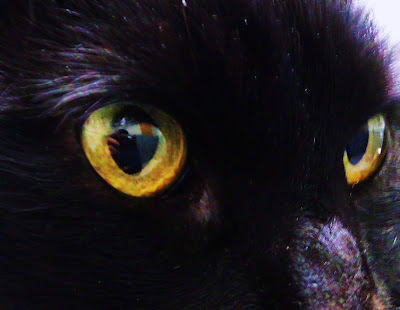 From that point on, Gypsy decided to become the grouchy one and wouldn't let people pick her up without growling at them. But I knew she was faking it, as she would also purr, at the same time. Purrhaps she was playing a game that she was her evil twin sister, Raven, come back to haunt us.

She loved to be petted and taken for rides in the car. We often stopped at the Burger King to buy french fries for her. She sat on my shoulder by the front window as I ordered and paid for the french fries. Then, when the fries were handed into us, she would greedily try to swipe them out of my hand. This always gave the Burger King employee a laugh. 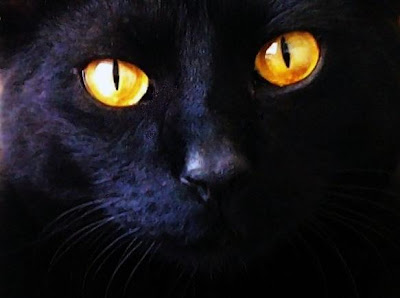 Gypsy had big round golden eyes that reminded me of the old-fashioned head lamps on early locomotives. Magic’s eyes were a deep orange. As they grew older, their eyes began to change color until they were indistinguishable. Gypsy had a full round head. Magic’s head was long and triangular.  Between the two of them, they produced five adorable little copies of themselves.  I found homes for them all. Magic was the perfect Daddy Cat.  He got right into the box with Gypsy and bathed the kittens every opportunity he could. Gypsy, like most new mothers, seemed to appreciate the father’s participation. She was a gentle mom cat. When she began to wean her kittens, Magic let them nurse on him. I mean literally, nurse on his tiny little male nipples. As soon as I found homes for the kittens, I took Magic to be neutered and planned on getting Gypsy spayed the following month. But the money didn’t come fast enough and she went into heat. I should have gotten her fixed first! Even tho’ Magic was neutered he tried everything he knew how to do that he did before. But it was not enough for Gypsy. I guess she knew he was shooting blanks!

A cat in heat can demand a lot of attention and yowl a lot. When we were not at home, I put her in the basement. But, was dismayed to discover her outside when I returned. She had climbed through a slim hole beside the plumbing that led into the neighbors side of the basement. (We lived in a duplex) The neighbor dogs barked like crazy as she calmly walked along the furnace flue to gain access to the outdoors. The neighbors, concerned about the ruckus their dogs were causing, opened their cellar door only to have Gypsy fly out. They did not know she was in heat, so they let her go outside!

Posted by Elizabeth Munroz at 6:13 PM