(Continued from part 1)
One lovely spring day, as Raven sat in the bedroom window looking out the screen, the window suddenly fell shut. It happened so fast, I couldn't save her. Caught between the closed window and the screen, she clawed through that screen in a flash and was gone.  Who knows where? We never saw her again. 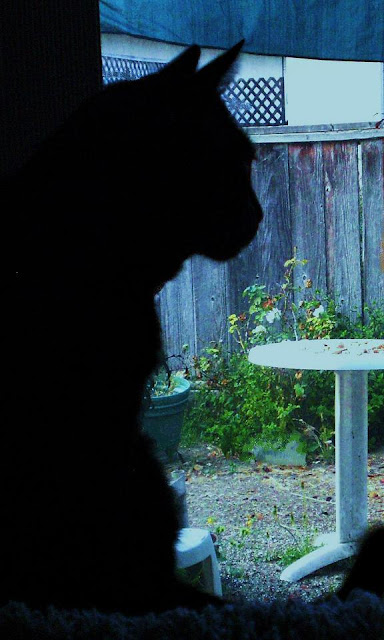 Perhaps adopted by some unsuspecting souls in the neighborhood, she became the bane of their existence.  It was almost a case of Good Riddance. (I said almost) I never before had a cat that treated me as though she personally despised me.

I couldn't just let her go unsought, though.  I did miss her!  So, I made up some posters and plastered them all over the neighborhood.  LOST, BLACK CAT, YELLOW EYES, ANSWERS TO RAVEN (etc.).  About the time I gave up on ever seeing her again, a little old lady called me on the phone in response to our ad campaign.  She said her son had found my cat.

“I’m pretty sure she is yours based on the description in your flyer, about six months old, female,,, looks like she might have some Siamese in her.

“Great! I'm so glad you found her and called! ” I said, “If you’ll give me directions to your place, I’ll be right over to take her home.

“Oh, that won’t be necessary.” She giggled cheerfully. “My son will bring the kitty to your place.  He’s already got her out in his car.”

The way she described her neighborhood, I wasn't sure I could find it, anyway. It was getting dark out and I wasn't feeling like driving through unfamiliar territory. Her address seemed so unfamiliar to me. I wondered how Raven got there. So, I gladly gave her instructions to our apartment.  A short time later her Sonny-boy arrived.  A linebacker for any NFL football team would never have gotten past this guy!  He was BIG!  There,  contentedly purring, nestled in his huge ham-hock arms was my little black shiny Raven.

“Gosh!  She looks so tiny!  She must have lost weight.” as I gathered her into my welcoming embrace.  “Thanks so much for bringing her home!.  I can’t believe she’s actually purring!”  I was thrilled that she seemed so glad to see me. Maybe her sojourn in the outside world had taught her to appreciate coming home. I knew Gypsy was now bigger than her sister and the Top Cat problem would be solved. Maybe we could settle down into a peaceful household.I came back into the living room and with a happy smile, announced to my family,  “Look!  I’ve got Raven!”

My husband glanced up and said, “That’s not Raven!”

“Of course, it is” I responded, a little surprised at his attitude.

“No!” He stated, “That cat can’t be Raven.  It’s letting you hold it without trying to rip your face off! Raven never purred before,either! And...” He added,”that cat is just too small to be Raven.”

I began to think he was right. Just then, Gypsy, who had been enjoying her freedom ever since her sister’s disappearance, came traipsing happily into the room.  The kitty in my arms suddenly leaped down to greet her, nose to nose.  No growling or spitting occurred. That made me really suspicious.

“Besides,” with a rueful grin, he said “That kitty is a boy!”

The obvious signs of masculinity swung beneath the tail.  “How could I have been so stupid as to not check that? We've been duped!” I shrieked, ran to the door and looked out on the empty parking lot. The Hulk had gone!

That’s how Magic came into our lives.

But, that's not the end... click here to continue
Posted by Elizabeth Munroz at 3:10 AM

Thank you! It was so funny when it happened.