Last night was pretty scary an' we are so glad we are inside cats! For many hours we heard loud crackling an' popping noises an' some big booms, almost like thunder, too! Me an' Buffy sure wondered what was going on.

Queen Bambi say when she was a outside kitten she remember those days when the crackling an' banging happenened. She say she ran everywhere an' could not get away from those loud noises. She even got lost an' had to find her way home. She feel much safer now living here wiff Mom an' the rest of us.

Ninja told me an' Buffy not be worry. Is a way that purrsons celebrate something' important called Independence Day. 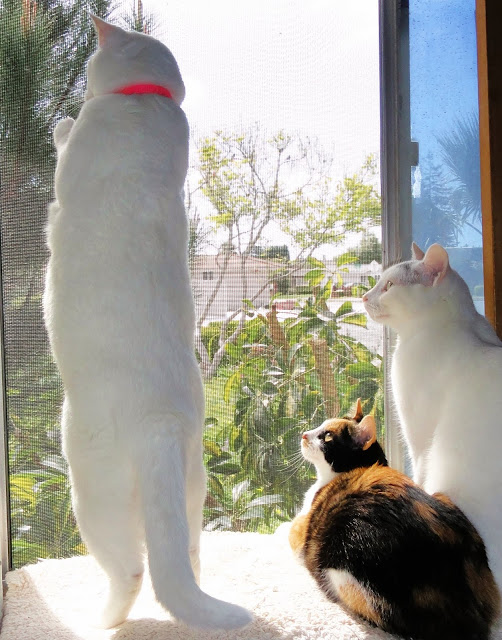 It's the birffday of America. This is the country where we live. That's what Ninja say. We like birffdays!

But, we didn't understand 'bout the loud noises. After all, there are lotsa important days an' dere are not all those bangs an' bams going on.

I guess we still has lots to learn.

Tonight, Ninja says, it will be much more exciting. He say if we sit in the window, we will see something very pretty called fireworks. They are like many bright colored flying bugs, only more better, he say.

We have never seen such a thing! We loves watching bugs (an' catching them, too)! We can hardly waits to see them fireworks!
Posted by Elizabeth Munroz at 1:53 PM

Have a Wonderful Independence Day!

Happy 4th of July to you! We hope you enjoy your fireworks!

Bein a outside cat, I agree.