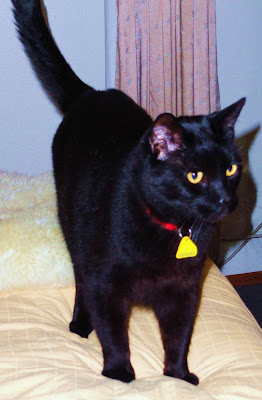 How can that be?

As Queen, I told him he must deport himself in a manner proper for my Guard and main Royal Advisor. He didn't smile, didn't straighten up, didn't purr. But, he did put on a brave Ninja face.

He refused at first to tell me what's wrong. Why in the world is he depressed on his birthday. Finally, he swallowed his pride and confessed that he didn't consider another year older to be to his advantage. In fact, his retirement from his younger, lithe, muscular, martial artist days are over. He feels therefore his life is over.

He feels he's lost his value as a mancat. He said, even though he knew better, there is an old superstition that a cat's nine lives are up when he becomes nine years old!

I told him in no uncertain terms to straighten up and fly right. Suddenly he laughed and told me he would not be doing any ninja flying techniques ever again.

But, his laugh was light-hearted, and more accepting of himself and his situation. 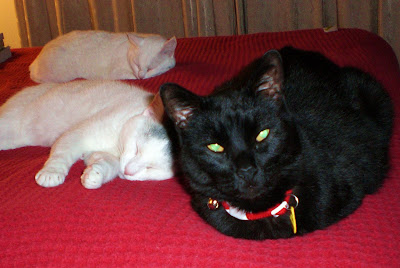 "After all, Queen Bambi," he said to me,  I'm happy to have my forever home and not be in that shelter where my previous people had left me."

I told him I was happy he was here, too.

"And best of all, I am happy to be here living with you and Spyder."

I gave him a nose kiss for that thoughtful remark and wished him a happy ninth birthday.
Posted by Elizabeth Munroz at 4:48 AM

Happy Birthday Ninja!!! You are still a beautiful, virile mancat in my eyes...nine years old is still a youngster :-)

Happy Birthday Ninja!
We are sure you know who Jackie Chan is. He's not young but he's still kicking! You can, too! :)

Happy birthday, Ninja! No need to be depressed at all. Our Annie is 10 or so now and she can still run around the house like a wild and crazy cat!

We wish you a wonderful celebration, with many more to come!

Happy Birthday Ninja! And don't worry ~ yoor ferst nine lives might be up on yoor ninth birthday ~ but then yoo start yoor second nine lives! It's a fact!

Well, Thank you! Very much!

Happy Birthday, Ninja! We think you've got lots of lives left in you!! Have a great day!!