No Fat Cats for Me!

No other cat could replace Keli. But, I have decided to look for another cat for Jeffery's sake. Jeffery is mourning her. He is already skin and bones since I got him last summer, but now he is barely eating a thing, only weighs 10 lbs, meows all the time, follows me around the house, wanders back and forth looking in closets and hiding places. Even though he laid down with her those few hours after and seemingly knew she was dead, I don't know if he realized she wasn't coming back.

I think if ever I am meant to get another cat, just for me, it will happen, but not right now. Even finding a cat for Jeffery I am not just picking the first one I see.

I had sent a picture of a shelter cat as actually as a joke asking friend's and family opinion on if I should adopt him. (see below) I couldn't possibly get a cat that huge and bulding at the seams. He would swallow Jeffery in one bite. And a long hair is out of the question. They take so much care, and I am often not home, going to doctors and such. I think that is also one reason Jeffery is so lonesome. 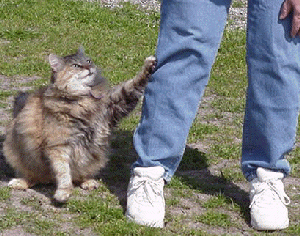 I would never get a humongous cat like that, especially with all the fur. Not only would Jefferey NOT like a cat 3 times his size, but Kats would leave me because of the cat hair we would be swimming in. I wasn't serious about sending this picture out to friends. But so many took me seriously! I just have to clarify here. It's just when I went to the shelter's website and saw that this cat had not been adopted in years, I could see why!

As for the shelters around here, I don't know if it is California law or not, but all of them test for Leukemia and something else, I can't remember at the moment. They spay and neuter, and give them all their shots. Then of course, I would get to pay for all that as part of the adoption fee. Fortunately as a Senior I would get a discount.

Two other things they do is "no kill", as long as the animal is healthy. They can do that because they have foster programs. People can volunteer to foster a cat, or several until they are adopted by someone. That way a long term cat doesn't get psychotic being locked in a cage all the time. Also, if I adopt an old cat, then I get a big discount.

Adopting Jeffery last summer, I got him for nothing. Part was the regular discount for my being a senior, part was for him being a senior (he's 15 or more) part was that he was already there 6 weeks. 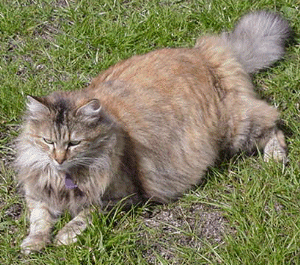 They had a glut of animals because of all the forest fires we had. Animals who didn't have any collars and tags or chips and their owners never called, were put up for adoption. Jeffery was a fire rescue cat. He still has a bit of asthma. The other part of my getting him for free is that there is a benefactor who donates money to certain kitty owners. She had her eye on me, and also on Jeffery, because he was being considered for euthanasia, so she covered the difference. She is called the Kitty Angel.

One of the problems that I see with the no kill policy is that the longer the cat is there the fatter they get from inactivity, so I don't think they are very healthy if they weigh so heavy. And, since I have Jeffery on high calorie diet, I can just see the problems I would have feeding one a low cal diet and him a high one! No fat cats for me, even though I'm a fat cat!
Posted by Elizabeth Munroz at 3:42 AM