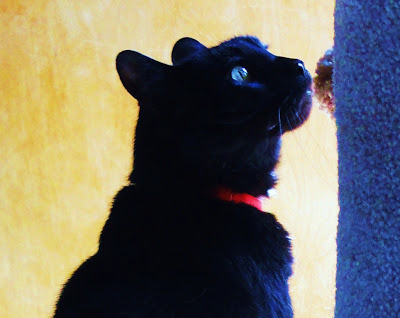 Ninja's Vet has called to tell me that Ninja does not have kidney disease.

I wonder if other kitties out there have the same??

All that is good news, and we are all happy about that. But, we still don't know what has caused his vomiting and huge amount of weight loss.

We have decided to feed extra food to Ninja separately, in the kitchen. He has full access to his regular dry food, Blue Buffalo. But now he has a couple spoonsfull of specialty wet food, too.

I asked the Vet what else the problem could be. He said that cats have tummy problems just like people do, stomach ulcers, for example. 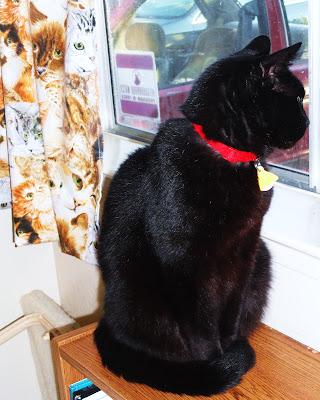 Perhaps this is Ninja's problem. So, he has ordered Zantac for him to take daily, also known as Ranitidine.

Since he weighs so little, he cannot take Zantac for people and has to have a specialty compound pharmacist to create his medicine.

Fortunately, Ninja likes the flavor and allows me to give it to him without a struggle.

I have been giving Ninja his medicine for almost a week.

He is having less episodes of vomiting. So, I am hoping it is working and he will get better.
Posted by Elizabeth Munroz at 10:25 PM

What a relief. We hope sweet Ninja continues to improve. xx

Yes, it is a relief!

Me is glad Ninja is feeling better. He sure is a handsome man-cat!
Mine mommy reads your whole blog to us. Her really likes your writings, and we feels the happys, and the sads and loves you writes about.
Fanks you fur sharing your life so good.
Love, TK

We just found out Ninja is feeling poorly. Sending purrrrrss that this is something easy to treat, and not to complicatged.

Thank you TK! Glad you enjoy the bloggie. I am happy you came to give us get well purrs. It means a lot! Love from the human who serves: Ninja, Queen Bambi, Timmy and Buffy

Thanks for the purrs and visiting the site!

Ninja is a very handsome black kitty :)
We purr the Zantac helps him and that he keeps getting better!!!

We are purring for handsome Ninja. I have to say that an enlarged kidney and a shrunken one is a pretty classic description of a type of kidney disease. Did the vet do bloodwork, a urine specific gravity test? Were tests done to check for kidney stones op other obstruction that may be causing the size issue? Ninja must be kept hydrated, otherwise the kidneys have to work too hard. Zantac helps vomiting when there is too much stomach acid, common in kidney kitties. Some vets do not think that owners will do what is needed to keep kitty alive and comfortable, as it can take some effort - if you are one who will, say so! Also please read here about various causes of vomiting:
http://www.felinecrf.org/nausea_vomiting_stomach_acid.htm

This is an excellent site, worth studying. Also, ask for a copy of the test results. They can be looked up on this site and then you may have more ?s for the vet.

Thank you Tillie and Georgia, We think the Zantac is helping somewhat, and he seems to be getting better slowly but surely. Time will tell, and more purrs for sure.

Thank you Laura and Taffeta Rose. What pretty names!
Yes, the vet did a lot of bloodwork and we have copies of the tests. Ninja, and all the kitties have various watering holes throughout the house, including a continuous running filtered fountain.(spoiled rotten cats!) And Ninja does drink lots of it. The tummy is doing much better! Thank you for the link! Much appreciated!

ooooh this is good news!!!! we are glad to hear this. and what a wonderful picture; we love when kitties wrap themselves within their tails like that :)

Thanks Junior, Stripes, Lucky, Pengy,
We think tail wrapping is pawsome, too!

Beautiful Ninja, we are pleased that you are feeling a bit better and the medicine is helping you. We send you lots of love and purrs and hope that you are all better soonest!

:) I posted on your previous post before I realized the date and that you have posted since. SO glad that you have ruled out some of the major issues. Hopefully the Zantac will help. (although I still highly recommend http://www.catinfo.org but then again I'm kinda on the food bandwagon)

Thanks Oliver and Gerry!!