Ninja and the Vet 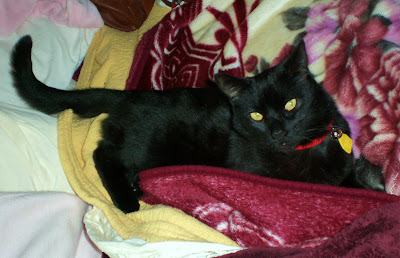 When Ninja came to live with me, he weighed 11 pounds, He was 8 years old. It wasn't long before he fattened up and weighed 13 pounds. That's when he got too heavy to jump to the top of the armoir where I fed the kittens full calorie food.

Ninja and chubby Bambi had a lower perch for their weight loss diet food. This worked out quite well. Though Bambi doesn't seem to have lost weight, Ninja began to turn into his old svelt self. It wasn't long before he could jump up on the armoir and that was the time I let him eat the same food the young cats ate. They were no longer kittens and just on regular diet by this time.


Lately, I've noticed Ninja not being able to hold down his meals.

At first I thought maybe hairballs, so I gave him Petromalt weekly. Still he continued to up-chuck a bit of his food. Then he began to up-chuck a watery foamy stuff. Now it's happening every day. 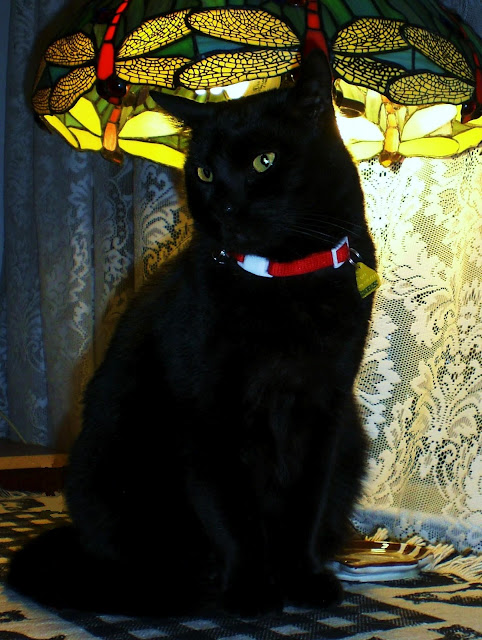 Suddenly, I've noticed when I pick him up he is lighter than any of the other cats. I became alarmed!

Diabetes? Kidney Disease? A tumor blocking his intestines? After reading up on all the possible symptoms, all the treatment options, and warnings to get him to a vet and not wait until he is too weak, I called the vet and made an immediate appointment.

Ninja really didn't complain too much about putting him in his carrier and he was quiet enough in the car, and such a GOOD BOY during the weigh in not complaining or struggling.

I felt horrified when I learned he only weighs 8 pounds 4 ounces.

With tears in my eyes I told the vet we had weighed him two weeks ago at home. He had weighed 9 pounds 8 ounces.

And that was what triggered my researching and making the decision to see the vet.

The vet thoroughly examined Ninja. I'm really worried now. Apparently he only has one functioning kidney, and it is huge. The other one has deteriorated down to a nub.

He has also lost muscle mass. Not a good sign at all.

I know he wasn't always this way. The vet would have noticed it on previous exams. At this point, he is not saying Ninja has kidney disease. He's saying that might be the most obvious possibility. But, he could also have diabetes. Or Thyroid disease. Or a combination.

I hope it's Thyroid disease! The vet says that is the easiest and least expensive to treat. 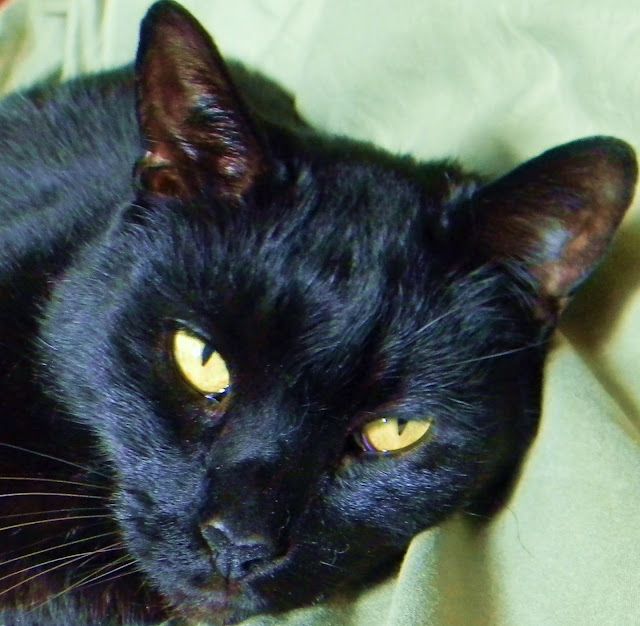 The vet has ordered blood tests which cost me nearly one quarter of my month's income.

If it is kidney disease or diabetes, I may have to make a very painful decision.
Posted by Elizabeth Munroz at 9:21 PM

Me is purring fur Ninja. Is so furry hard to has a kitty what is sick.
Love, TK

KC and the Giggleman Kitties said...

Thank you TK and KC! We need all the helps we can get.
Love,
Mommy of Ninja, Bambi, Timmy and Buffy

We just saw this posted on the CB and came to offer our purrs and purrayers. It's so scary when faced with unknowns, all possibilities seemingly awful. We'll keep our paws crossed that it's something easily treatable and that all will be well.

-Nicki, Derry and the human (Kim)

So sorry to learn of Ninja's health problems, we're hoping, praying, purring it will be something easy and not costly to deal with.
It's so hard when our furry ones are feeling poorly but cannot tell us, and we watch and wait for those little signs ...
May the blessings of this Easter season be yours.

I do so hope that it is thyroid disease or something else easy (and not too expensive) to treat. Herman sends healing purrs.

We too hope Ninja's problem is something treatable / manageable. It's such a worry when one is ill and very stressful on the finances. Sending pawhugs and purrs.

oops, you have word verification on which is hard for many blogers to read. Would you consider turning it off?

We are purring for your gorgeous Ninja!

Please know that if it's kidney disease that that is treatable, and there are inexpensive ways to help him. This web site is excellent:
http://www.felinecrf.org/diagnosis.htm#BUN/creatinine_ratio

And consider joining the yahoo group for feline CRF.

Thank you Nicki, Derry and Kim

Thank you. Truly it is difficult to know when kitties are unwell. By the time we figure it out they've probably been not feeling well for quite some time. Makes me sad to realize it.

Thanks for letting me know the darned word verification was still turned on! I thought I had already fixed this. And thank you for having the patience to deal with it in order to post your comment!

Thanks for the link Laura and Taffeta Rose!

We are sending healing purrs to Ninja and our paws are crossed that it will be something easy to treat and he will have many more healthy years with you.

Oh NO! We are sending big purrs right away! Prancer has been sick and won't get well and we're checking fur underlying reasons so I understand your anxiety. We hope efurrything turns out well. **headbumps**

Purrs and healing energy for sweet Ninja. To echo what others have said, there are good sites and support groups for both kidney disease and diabetes in cats. I've had two old boys with CRF and managed to keep them quite comfortable for some time at home with fluids and Chinese herbal formulas and dietary supplements, which gave them extra time and a good quality of life. I've also managed to successfully treat another old girl who had hyperthyroidism with Chinese herbs and less than half the normal dose of methimazole. I've never had a diabetic kitty, but I know that methyl vitamin B12 (methylcobalamin) is a vital supplement. And there are sites out there for support should you need to treat him for diabetes. The kitties and I hope for restored health for Ninja.

Diabetes is not a death sentence. I treated my own cat for seven years before she died of cancer and successfully treated and got four more into remission. The learning curve is steep, but very short. A glucometer purchased at your local megamart and some high protein low plant based ingredient cat food purchased at your local pet store (certain flavors of fancy feast is one popular brand Wellness is another. I even used Walmart brand food for a foster and had great results. There are many OTC foods that are much better then the expensive 'prescription' food your vet will offer.

Check out felinediabetes.com and especially the message boards if you get a diabetic diagnosis there are a large number of wonderful people with a lot of experience who can help you at any time of the day.

You should also check out http://www.catinfo.org on why the right foods can make such a huge difference in most of the diagnosis you could get.

We hope Prancer is better now! Purrs be with yoo!