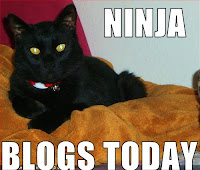 Turkey day came and went and no kitties in this house got any turkey! But we did get salmon and shrimp. Any good Ninja will tell you seafood is better for us! And I agree.

Miss E has been filling in for us this month as she was writing a novel. Well, not exactly. But, she joined something called National Novel Writing Month. The goal was to complete fifty thousand words in one month, and she did it! That's a LOT of haiku, if you ask me. Less is more. But, since she was so busy with the computer, we.... none of us, had an opportunity to get online. I see she added some stuff of her own to our blog.

I've known a few of those cats that she wrote about in one of my past lives. Stinky was one of the two pink cats she had as a kid. I used to hang out with him under the full moon, looking for girl cats. Ah, those were the days! I wasn't a Ninja then. I was a tuxedo cat, and quite the debonair cat around town. I knew Mickey, too. I was just a little girl kitten then, and he was a big grown up cat. I knew Beau, too. But not in his most recent reincarnation, as I was already a Ninja by that time. We knew each other way way back when. We had our disagrrrreements. He was always talking about how we were all descended from the ancient Egyptian cats, and am quite sure that we came from panthers. Otherwise, how would there be black cats? It is only logical. Is it not?

Bambi has gotten plumper and has a sleek rabbit fur coat. I don't know how any of us are going to lose any weight. I prefer to think that my muscles are getting heavier. It comes with age. You know. I am now eight years in people age. That makes me 48 according to some quotes I've seen on the internet. You might want to check out this chart I found


Spyder has grown in leaps and bounds. Of course, he does a LOT of leaping. I'm not so sure about bounding. But, he can leap from the floor to the kitchen sink, and from there to the top of the refrigerator. As a retired Ninja, I no longer have to prove myself by doing these daring acts. I'm as nimble as I ever was. But, I don't mind teaching the young Spyder how to perform his leaping techniques. He is getting rather good. Especially at leaping up into the high shelf of the closet. Just the other day, he leaped up there and pushed things around until he had a cozy place. But, when he tried to jump down, he got his feet caught in a purse strap and he didn't quite make it to the bed. If he were a well trained ninja, that never would have happened.

I guess I shouldn't expect too much of the little fella'. After all, he is not a black cat. Only black or dark grey cats can become ninjas. Only rarely would a ninja be white, and that is when it is wintertime in the snow and it is daytime.

Here is a Cat Haiku for you from the book, 'Cat Haiku", by Deborah Coates

Oh good, you're home. I
Celebrate joyously with
A rousing ear twitch

It is time for my sleep training practice.
Posted by Elizabeth Munroz at 2:40 AM