.
.
We were driving in a car and it broke down. With no cell phone and being out in the middle of nowhere that we knew, we got out of the car and started walking. I really wasn't comfortable with Elizabeth carrying me, so I wriggled out of her arms, and landed nicely on a soft patch of well mown lawn. She, of course, was worried and tried to catch me. But, you know, she's not as fast as she used to be, and I am still faster than her, even at my advanced age. Though I am only 18 in people years, that makes me about 126 in dog years. I don't know how to count that in cat years. Anybody know?

Anyhow, I knew which way we were going and because it was a warm sunny day with just a little bit of sweet breeze, I kept ahead of Elizabeth until she realized that I was leading her home, so she stopped trying to catch me, and she could tell, I was not going anywhere except on the sidewalk.

After all these years, I know enough to NOT go into the street, or run underneath some stranger' front porch. Besides I am tired of following her all over the house, it was great to have her following me for a change. Though, I try like crazy to get her to follow me at home. I cut her off when she goes the wrong direction, for example, when I am trying to aim her for the kitchen so she can feed me, or aim her to the heater so she can turn it on, or lead her to the bathroom to turn on the fresh water. Who wants that old water in the bowl? Not me! Well, the problem is that she is too dumb. No offense, she can't help it her mind doesn't focus well. If she would pay attention she would definitely know where I am leading her to. Sometimes she does focus and she can read my mind perfectly.

Anyhow, back to my story: We were walking along and it was a long way from home, about seven miles. Now, she's no young chicken, but I am lot's older than her, so naturally, guess who starts to give out first. Dang it! Me! Well, at least she could figure that out when I sat down and let her catch up to me. So, she picked me up in her arms (just like a human baby) and carried me the rest of the way! I love it when she hold me like that. Helps me feel like a little baby kitty again. I purr and rub my head against her shoulder to let her know how much I appreciate it. Only thing is her arm gets tired and then she has to put me down.

But, she didn't do that in the dream. She kept carrying me until she woke up.

Oh, I didn't tell you? Yes, that was last night's dream. I often invade her dreams so we can share them.
.
. 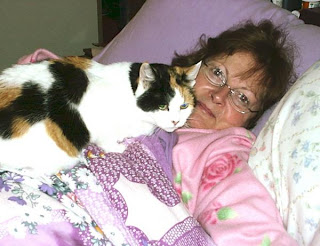