Confessions of an Overweight Ninja Cat

A ninja should never have to face shame. It is inappropriate. Yet, when I met Jeffery, I learned I might have to swallow my pride. He would laugh and tell me I didn't know half of it, and I had so much more to learn of life like he did. After all, I was less than half his age. I understood and respected his wisdom, but I sure would become shamed for my failings. I have not been faithful to my martial arts training, I must admit. 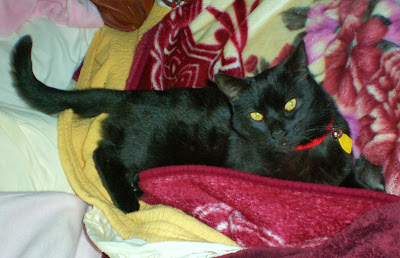 It all started when Jeffery let me eat his food. Then when Queen Bambi came along, she stuck her nose up in the air at the kibble and I ate whatever she left behind. Of course, when Spyder came to live with us, that increased the problem because he needed special kitten food, high in nutrition and calories. Both Bambi and I would nibble away at it at every opportunity even though we had our own adult food. It didn't take long before Mom discovered our indiscretions, so she fed Spyder on top of the refrigerator. Naturally, as a ninja I could fly up there in a flash and steal whatever I wanted. But, I had grown out of proportion to ninja jet propulsion talents and had to find other ways to assuage my appetite.

It is a tricky thing with meals around here. Whenever Mom feeds Spyder and Little Sister, she closes Queen Bambi and me into another room. When she opens the tuna can the sound is so tantalizing it is hard to retain one's dignity. I have done my share of lying on the floor with my nose pressed at the bottom of the door. I would slip my paws beneath it to dig a hole in the carpet to squeeze myself through however, my squeezing ability is lost! As you know, this is a very advanced technique of ninjas. I did not have the opportunity to practice it much at my previous abode. The Dojo was quite large and had no closed doors. The humans called it a basement. I had to compete with the dogs for my food, and learned quickly how to gobble. So, gobbling took priority over squeezing, you see. 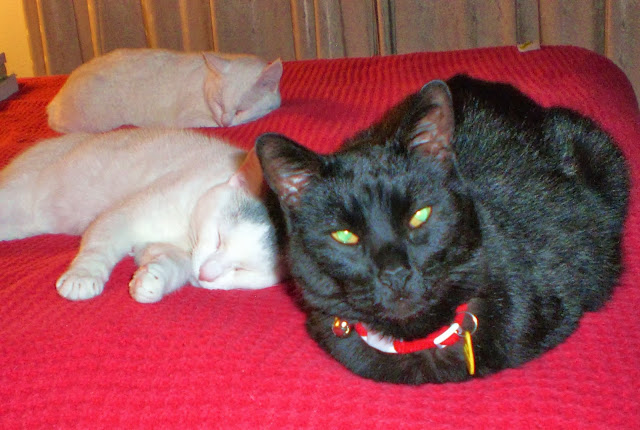 As long as I am confessing my over indulgences, I have to admit the full truth of it... after the door is open and the young ones aren't looking I have been stealing Little Sister's food, too. All this holiday indulgence has got to stop!
Posted by Elizabeth Munroz at 5:03 PM