The kids (kits) got to go outside today! 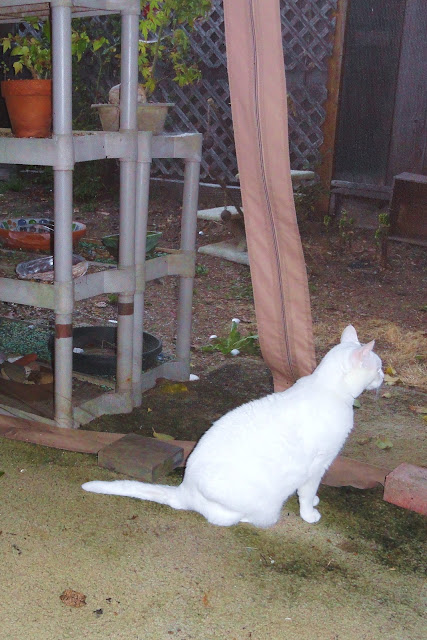 The sliding glass doors in their room leads out into a screened in Gazebo. Today was a nice day and so I let them out.

Ninja and Bambi are always trying to get out any door they can all the time, so they were out in a flash to investigate. They seemed a bit disappointed, though. They couldn't figure out how to get beyond the screening.

Timmy and Buffy were very nervous about being outside. Timmy has accidentally gotten outside twice and was traumatized by his experiences.

Buffy has never been outside under any circumstances. She handled the adventure much better than Timmy did sniffing around and very interested in an insect flying by.

I even brought the kittens out in the large carrier. Since they are feral, and have been living in the bathroom the last two weeks they seemed quite happy to be outdoors and were very interested in the birds outside.

I took a lot of pictures but they didn't turn out well. I had the camera on the wrong settings! By the time I realized it, dusk was upon us, it was chilly and time to go in.

You might not be able to discern the screening. Bambi is sitting before the zipper opening to wistfully gazing at the big outside world and all the nearby dirt where she would just LOVE to roll around in! The gazebo has an old carpet for it's "flooring". Someday it will be something more attractive. You will notice some shelves to her left. That is where my bonsai collection is displayed.


Posted by Elizabeth Munroz at 3:13 AM

Sounds as if they had a nice time outside.

We are never let outside due to our handicapped condition. We are happy as long as we get to see a bit of the birds and trees, not necessary roam outdoors. Purrs!

We can't roam around outdoors either. But, we sure did enjoy being in the screened in Gazebo that attached to the house. We got to go outside again today. Timmy was nervous because of the wind, though.

We just heard about Ninja. We are so sorry for your loss. Sending soft purrs and comforting hugs. Run free, Ninja!

We were very sorry to learn that Ninja had to go to the Rainbow Bridge. Comforting purrs

We just heard the sad news. poor Ninja! We hope that knowing he had a good life with you is a comfort. We send purrs for you all and Bambi who must be very lonely.

We're very sorry it was Ninja's time to leave for the bridge. We know you miss him. {{{hugs}}}, purrs and pawhugs.

Your gazebo is great. I get to go outside on a harness and leash and I love it. We are all so sorry about poor Ninja. We send comforting purrs and Mom sends hugs.

Thank you Laura and Taffy! We like what you said .... "Run free, Ninja" He's always wanted to get outside, so now the idea that he is running free seems so beautiful and right. Thanks.

Thank you Alasandra, The Cats and a Dog, We appreciate your comfort.

Thank you Au and Target. Ninja had three years with us as our older mancat (and guardian of his Queen Bambi) Yes, she seems lonesome without him and keeps jumping up onto the screen and shaking the front door. Seems like she might be wanting to go hunt for Ninja.

Thank you Jan. Yes, missing him is already happening. It is comforting to know he is right outside in the garden.

Thank you Spyro and Mom. We sure do need the comfort and hugs.